I figured out a GitHub Actions pattern to keep track of a file published somewhere on the internet and automatically open a new repository issue any time the contents of that file changes.

Here’s why I needed to solve this problem.

I want to add gzip support to my Datasette open source project. Datasette builds on the Python ASGI standard, and Starlette provides an extremely well tested, robust GZipMiddleware class that adds gzip support to any ASGI application. As with everything else in Starlette, it’s really good code.

The problem is, I don’t want to add the whole of Starlette as a dependency. I’m trying to keep Datasette’s core as small as possible, so I’m very careful about new dependencies. Starlette itself is actually very light (and only has a tiny number of dependencies of its own) but I still don’t want the whole thing just for that one class.

So I decided to extract the GZipMiddleware class into a separate Python package, under the same BSD license as Starlette itself.

The result is my new asgi-gzip package, now available on PyPI.

What if Starlette fixes a bug?

The problem with extracting code like this is that Starlette is a very effectively maintained package. What if they make improvements or fix bugs in the GZipMiddleware class? How can I make sure to apply those same fixes to my extracted copy?

As I thought about this challenge, I realized I had most of the solution already.

Git scraping is the name I’ve given to the trick of running a periodic scraper that writes to a git repository in order to track changes to data over time.

It may seem redundant to do this against a file that already lives in version control elsewhere—but in addition to tracking changes, Git scraping can offfer a cheap and easy way to add automation that triggers when a change is detected.

I need an actionable alert any time the Starlette code changes so I can review the change and apply a fix to my own library, if necessary.

Since I already run all of my projects out of GitHub issues, automatically opening an issue against the asgi-gzip repository would be ideal.

My track.yml workflow does exactly that: it implements the Git scraping pattern against the gzip.py module in Starlette, and files an issue any time it detects changes to that file.

Starlette haven’t made any changes to that file since I started tracking it, so I created a test repo to try this out.

Here’s one of the example issues. I decided to include the visual diff in the issue description and have a link to it from the underlying commit as well. 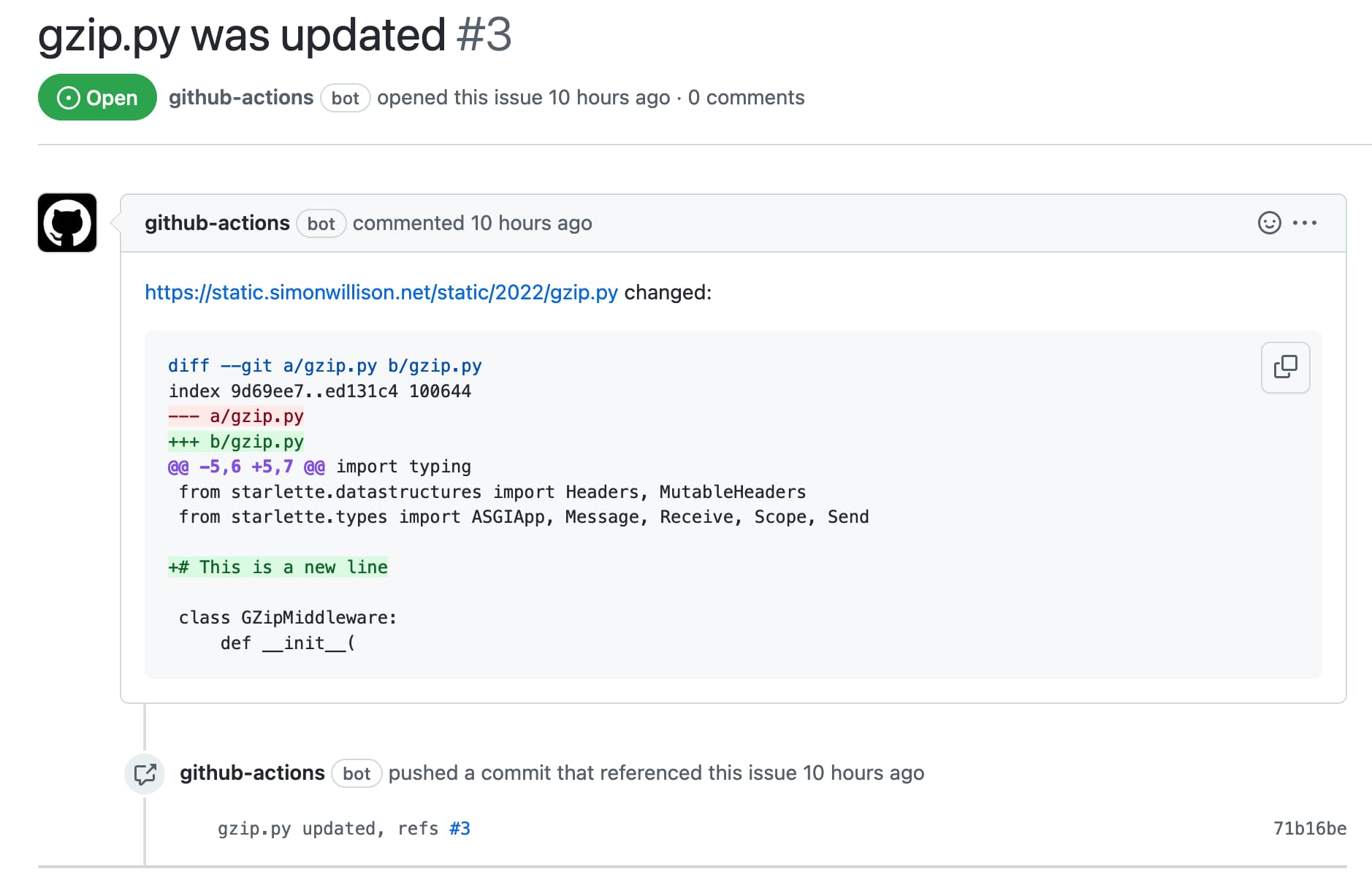 The implementation is contained entirely in this track.yml workflow. I designed this to be contained as a single file to make it easy to copy and paste it to adapt it for other projects.

It uses actions/github-script, which makes it easy to do things like file new issues using JavaScript.

In the asgi-gzip repository I keep the fetched gzip.py file in a tracking/ directory. This directory isn’t included in the Python package that gets uploaded to PyPI—it’s there only so that my code can track changes to it over time.

I built this to solve my "tell me when Starlette update their gzip.py file" problem, but clearly this pattern has much more interesting uses.

You could point this at any web page to get a new GitHub issue opened when that page content changes. Subscribe to notifications for that repository and you get a robust , shared mechanism for alerts—plus an issue system where you can post additional comments and close the issue once someone has reviewed the change.

There’s a lot of potential here for solving all kinds of interesting problems. And it doesn’t cost anything either: GitHub Actions (somehow) remains completely free for public repositories!

Almost six months after writing about this... it triggered for the first time!

Here’s the issue that the script opened: #4: tracking/gzip.py was updated.

I applied the improvement (Marcelo Trylesinski and Kai Klingenberg updated Starlette’s code to avoid gzipping if the response already had a Content-Encoding header) and released version 0.2 of the package.

Next: Datasette Lite: a server-side Python web application running in a browser

I figured out a pattern to open an issue on GitHub any time a Git-scraped file's content is detected to have changedhttps://t.co/Nr7WzK0wbJ