New this week: widgets and permissions.

To recap: this Django app borrows some ideas from Datasette: it encourages you to create a read-only PostgreSQL user and grant authenticated users the ability to run one or more raw SQL queries directly against your database.

You can execute more than one SQL query and combine them into a saved dashboard, which will then show multiple tables containing the results.

This week I added support for dashboard widgets. You can construct SQL queries to return specific column patterns which will then be rendered on the page in different ways.

There are four widgets at the moment: “big number”, bar chart, HTML and Markdown.

Big number is the simplest: define a SQL query that returns two columns called label and big_number and the dashboard will display that result as a big number:

Bar chart is more sophisticated: return columns named bar_label and bar_quantity to display a bar chart of the results: 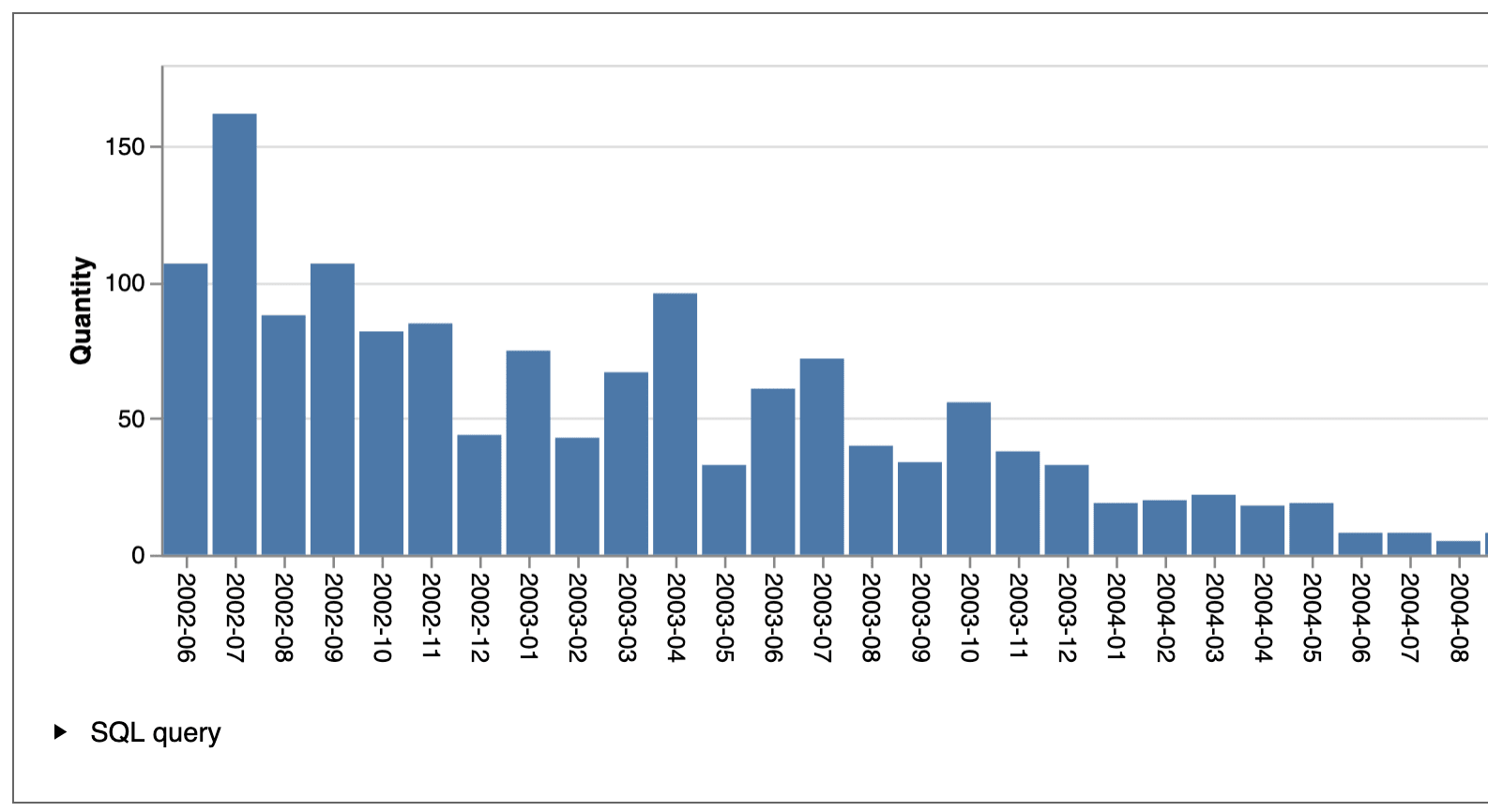 HTML and Markdown are simpler: they display the rendered HTML or Markdown, after filtering it through the Bleach library to strip any harmful elements or scripts.

I’m running the dashboard application on this blog, and I’ve set up an example dashboard here that illustrates the different types of widget. 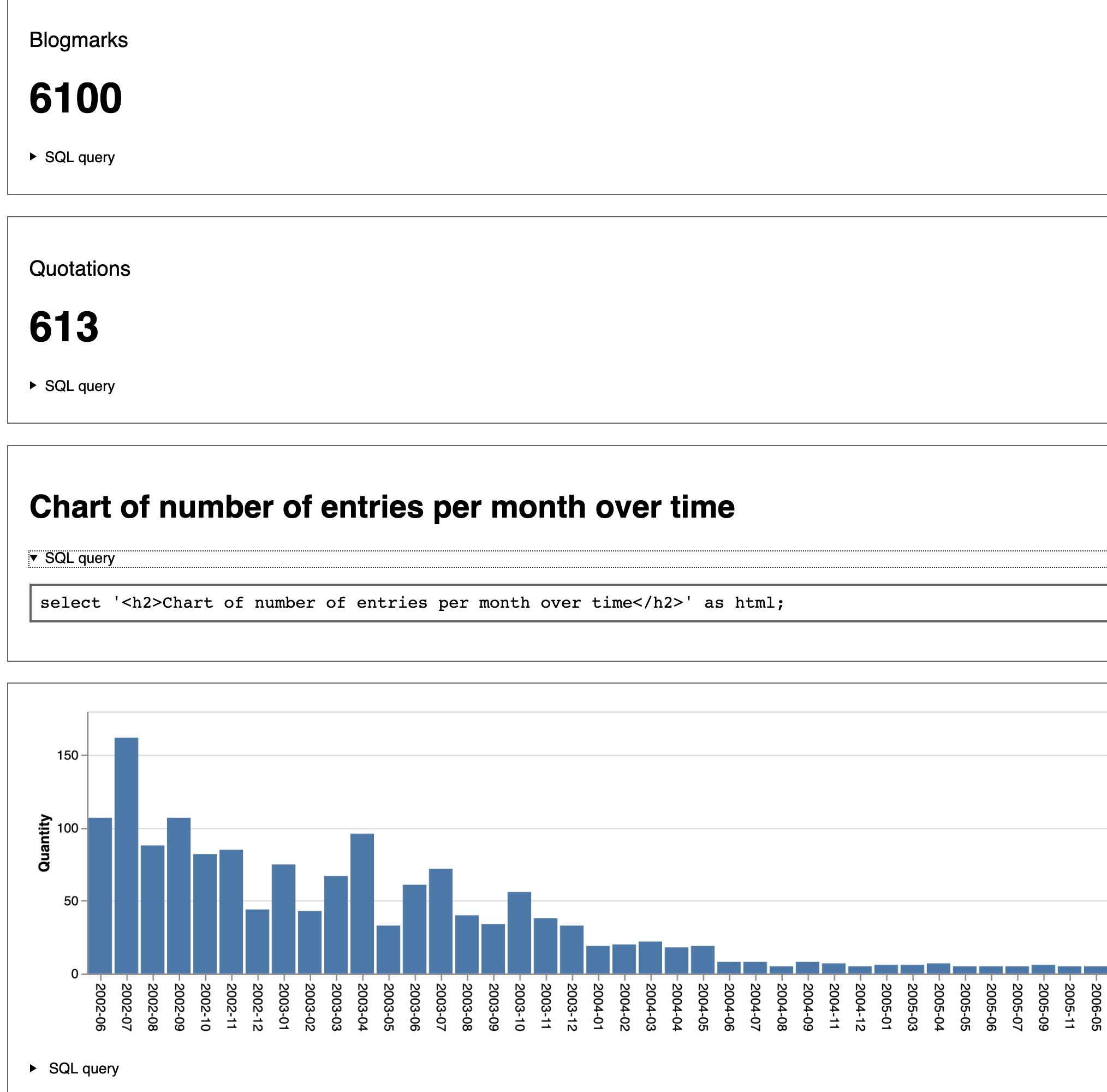 Defining custom widgets is easy: take the column names you would like to respond to, sort them alphabetically, join them with hyphens and create a custom widget in a template file with that name.

So if you wanted to build a widget that looks for label and geojson columns and renders that data on a Leaflet map, you would create a geojson-label.html template and drop it into your Django templates/django-sql-dashboard/widgets folder. See the custom widgets documentation for details.

Which reminds me: I decided a README wasn’t quite enough space for documentation here, so I started a Read The Docs documentation site for the project.

Datasette and sqlite-utils both use Sphinx and reStructuredText for their documentation.

For django-sql-dashboard I’ve decided to try out Sphinx and Markdown instead, using MyST—a Markdown flavour and parser for Sphinx.

I picked this because I want to add inline help to django-sql-dashboard, and since it ships with Markdown as a dependency already (to power the Markdown widget) my hope is that using Markdown for the documentation will allow me to ship some of the user-facing docs as part of the application itself. But it’s also a fun excuse to try out MyST, which so far is working exactly as advertised.

I’ve seen people in the past avoid Sphinx entirely because they preferred Markdown to reStructuredText, so MyST feels like an important addition to the Python documentation ecosystem.

datasette-auth-passwords implements password-based authentication to Datasette. The plugin defaults to providing a username and password login form which sets a signed cookie identifying the current user.

Basic auth has some disadvantages—most notably that it doesn’t support logout without the user entirely closing down their browser. But it’s useful for a number of reasons:

I’m continuing to flesh out authentication options for Datasette, and adding this to datasette-auth-passwords is one of those small improvements that should pay off long into the future.

Datasette instances published to Vercel using the datasette-publish-vercel have previously been affected by an obscure Vercel bug: characters such as + in the query string were being lost due to Vercel unescaping encoded characters before the request got to the Python application server.

Vercel fixed this earlier this month, and the latest release of datasette-publish-vercel includes their fix by switching to the new @vercel/python builder. Thanks @styfle from Vercel for shepherding this fix through!

My Niche Museums project has been in hiberation since the start of the pandemic. Now that vaccines are rolling out it feels like there might be an end to this thing, so I’ve started thinking about my museum hobby again.

Hopefully someday soon I’ll get to visit and add an entirely new museum!

This is Weeknotes: django-sql-dashboard widgets by Simon Willison, posted on 21st March 2021.

Next: The Airtable formulas at the heart of everything