One of my favourite uses for the GPT-3 AI language model is generating explanations of how code works. It’s shockingly effective at this: its training set clearly include a vast amount of source code.

(I initially thought this was related to GitHub Copilot being built on GPT-3, but actually that’s built on a GPT-3 descendent called OpenAI Codex.)

Here are a few recent examples.

I pasted it into GPT-3 (here’s how to use the playground interface) and started asking questions.

This uses the feature of GPT-3 where you can get a response, then add more text and run it again to get further details.

Anything in bold is text that GPT-3 responded with. The rest are my prompts.

The (?xm) notation is a modifier that allows the regular expression to span multiple lines and to use comments.

Why does it use match.lastgroup?

The match.lastgroup variable contains the name of the last group that was matched by the regular expression. This is used to determine the type of token that was matched.

This is a really good, really clear explanation of what’s going on.

I already knew how that code works though. Let’s try something that I genuinely didn’t understand.

Chris Haynes tweeted an ingenious demo showing how the new Web Component Declarative Shadow DOM <slot> mechanism (described here) can be used to create a page that streams content from a server, filling in different regions of the page as the content arrives—without using any JavaScript!

The polyfill code lives in enamel-lite.js and I could not figure out how it works. So I asked GPT-3.

This code polyfills the Shadow DOM API for older browsers that do not support it.

OK, that sounds convincing, but it’s not enough information for me. So I added another prompt:

How does it do that?

The code uses a MutationObserver to watch for changes to the element’s children. When a new child is added, the code checks to see if that child is a <template> element with a ’shadowroot’ attribute. If so, the code creates a Shadow Root for the element and appends the template’s content to it. Finally, the code removes the template element from the DOM.

That is a really good explanation. After reading that, I went back to look at the code again and I now completely understand how it works.

I wanted to build a SQL query that would return all of the rows in one table that were not represented in another table... but where the rows used a compound primary key covering two columns. I didn’t know the right syntax for this off the top of my head.

First, I needed to create a table with a compound primary key. Rather than look that up I asked GPT-3 directly:

SQLite create a pages table that has a compound primary key of type, id and a content column.

It seems to know about SQLite SQL syntax, which is handy. Turns out you create a compound primary key using PRIMARY KEY (col1, col2) at the end of the table definition.

I added a second line with my own CREATE TABLE, then asked it to build me a query:

This is useful! I thought that a WHERE ... NOT IN (SELECT pattern would be good here, but I wasn’t sure of the syntax for looking up two columns at once.

I’m pretty sure this could instead be solved with a join... so I asked that too:

That query but using a join:

But which is better? I posed two more questions:

Which of those two queries is more efficient and why?

Why is a subquery more efficient?

A subquery is more efficient because it only returns the rows that meet the conditions specified in the WHERE clause. A LEFT JOIN returns all rows from the left table, even if there is no match in the right table.

As with everything GPT-3, this answer sounds very convincing! But is this actually true? I would expect the SQL query optimizer to be smart enough to optimize the LEFT JOIN to the point where it would run efficiently. I think GPT-3’s answer to that question is actually very misleading.

And that’s not surprising, because GPT-3 doesn’t actually know anything about anything at all. It’s a huge pattern generator. You can’t trust anything it says, because all it does is group words together into convincing looking shapes based on text that it’s seen before.

Once again, I’m reminded that tools like GPT-3 should be classified in the “bicycles for the mind” category. You still have to know how to pedal!

They’re fantastic tools for thinking, but to actually use their output effectively requires VERY deep knowledge—both of the subject matter in question, and of the way that the AI tools themselves work.

Got this great tip from Riley Goodside:

When prompting like this, it’s important (and difficult) to avoid leading questions. If you ask which of two queries are more efficient and why, it’s extremely unlikely to to say “It doesn’t matter,” no matter how true that is.

I hadn’t considered this at all. I’ll be keeping that in mind in my future experiments.

Bonus: how about mathematics?

I decided to try one more thing: could it explain mathematical equations?

GitHub recently added LaTeX rendering to their Markdown implementation. I grabbed a formula at random from this page of documentation:

This is the Cauchy-Schwarz inequality.

OK, so you know what it’s called. But how does it work?

I added “Explain the formula syntax step by step, using $$ wrapped around the formula steps:” (the $$ bit is explained in a moment):

Here’s why I added that bit about $$ to the prompt: doing so caused it to produce its answer in valid GitHub Markdown syntax. I pasted that into a Gist and rendered it, and it came out like this: 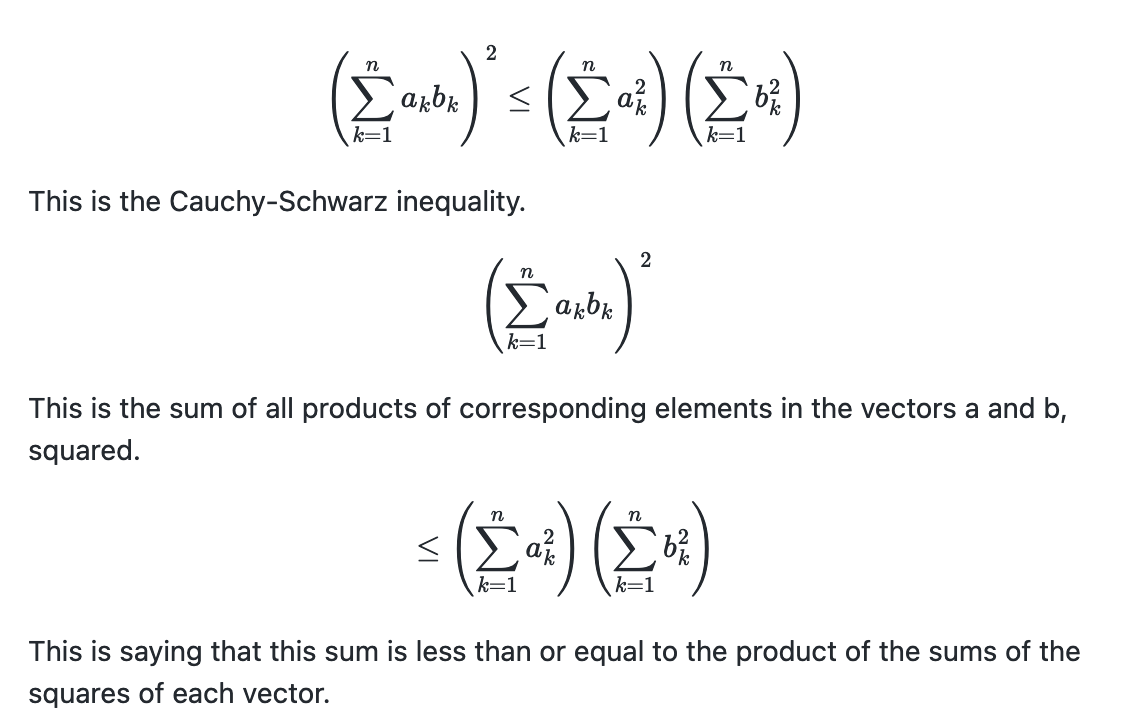 Here’s another prompt pattern I stumbled across that seems to work really well: “Explain every line of this config file:”. I tried it against the Lit example from the Vite 3.0 starter templates:

Explain every line of this config file:

This is Using GPT-3 to explain how code works by Simon Willison, posted on 9th July 2022.

Next: sqlite-comprehend: run AWS entity extraction against content in a SQLite database

Wrote up some notes on how I've been using GPT-3 as a tool for explaining how code works https://t.co/Bfbw4Whbs8