This week I built a Datasette plugin that lets you query a database by drawing shapes on a map!

datasette-leaflet-freedraw is my new plugin which brings the excellent FreeDraw Leaflet module to Datasette.

It’s a pure-JavaScript plugin which looks for Datasette SQL parameters called :freedraw and enhances them with an interactive map. You can then draw on the map to populate the form field with a GeoJSON MultiPolygon representing the shape that you drew. Submit that to the server to excute it as part of a query. 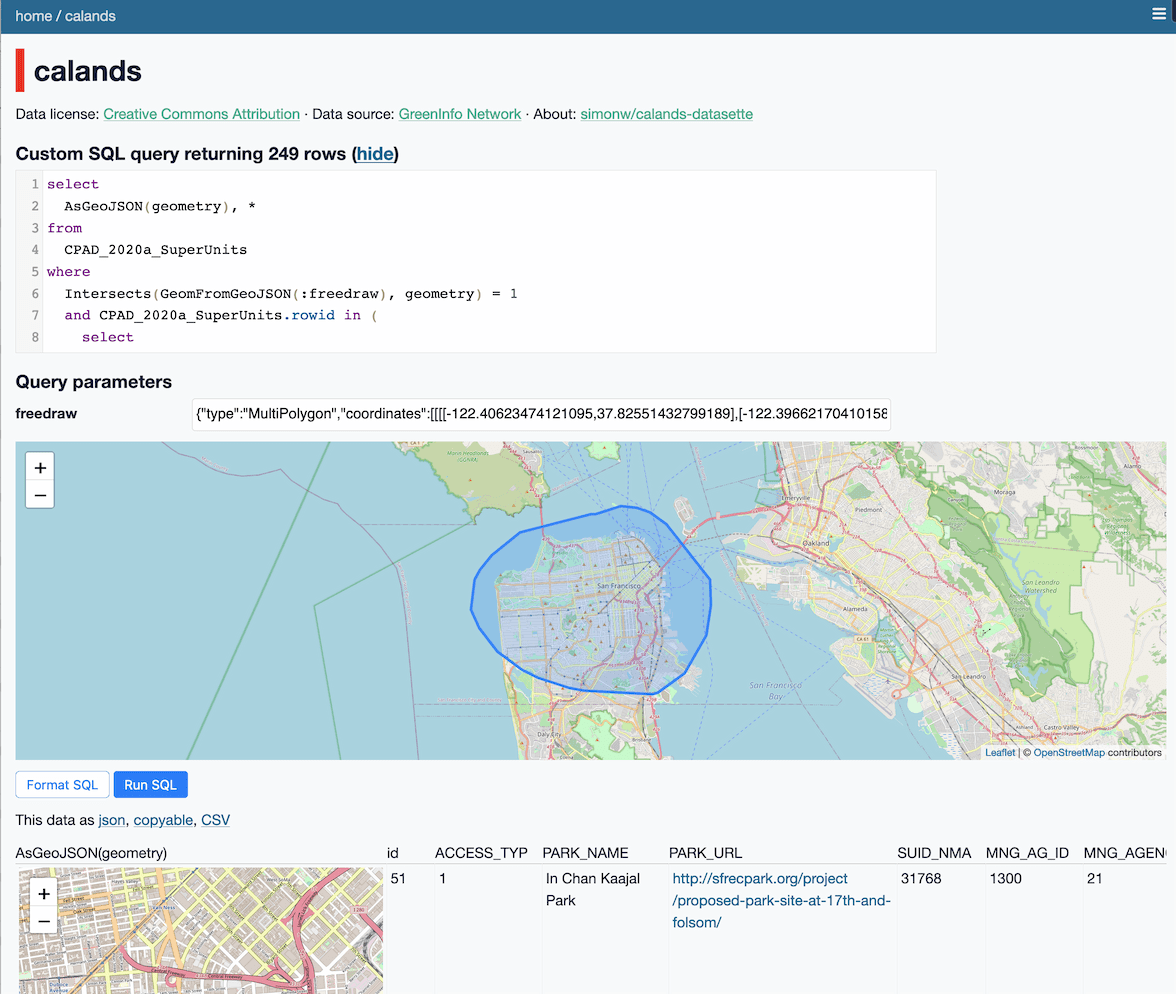 This is best illustrated with a demo. Here’s a SQL query that let you draw a shape to find California protected areas (parks, nature reserves and suchlike) that intersect with the polygon that you draw:

(That from SpatialIndex sub-select at the end is a pattern for taking advantage of SpatiaLite spatial indexes.)

The plugin itself is pretty simple: it scans for freedraw input fields and enhances them with a map interface that writes GeoJSON back to the form field.

You can then use SpatiaLite functions such as GeomFromGeoJSON() to transform that user input into something that can be used in a query.

Another fun query: let’s add WHERE PARK_NAME like '%mini%' to the query to filter for just the “mini parks” in San Francisco:

Here are the mini parks for San Francisco and for Oakland.

This demo uses the user’s shapes as part of a SELECT query, but it’s also possible to use Datasette’s Writable canned queries to create forms that will save the shapes to a database using an INSERT or UPDATE query.

If you want to try this plugin out note that it currently requires the Datasette 0.54a alpha. This is because it takes advantage of the new <script type="module"> support I added last week. Update 25th January 2021: Datasette 0.54 has now been released.

Other releases this week

I recorded my talk for FOSDEM—and in doing so I broke my unproductive streak and pushed out releases for a whole bunch of Datasette projects—partly through fixing bugs I spotted while trying to record the talk!

This is Drawing shapes on a map to query a SpatiaLite database (and other weeknotes) by Simon Willison, posted on 24th January 2021.

Next: Datasette 0.54: The annotated release notes