This week I built a geospatial search engine for protected areas in California, shipped datasette-graphql 1.0 and started working towards the next milestone for Datasette Cloud.

This weekend I learned about CPAD—the California Protected Areas Database. It’s a remarkable GIS dataset maintained by GreenInfo Network, an Oakland non-profit and released under a Creative Commons Attribution license.

CPAD is released twice annually as a shapefile. Back in February I built a tool called shapefile-to-sqlite that imports shapefiles into a SQLite or SpatiaLite database, so CPAD represented a great opportunity to put that tool to use.

It provides faceted search over the records from CPAD, and uses my datasette-leaflet-geojson plugin to render the resulting geometry records on embedded maps. 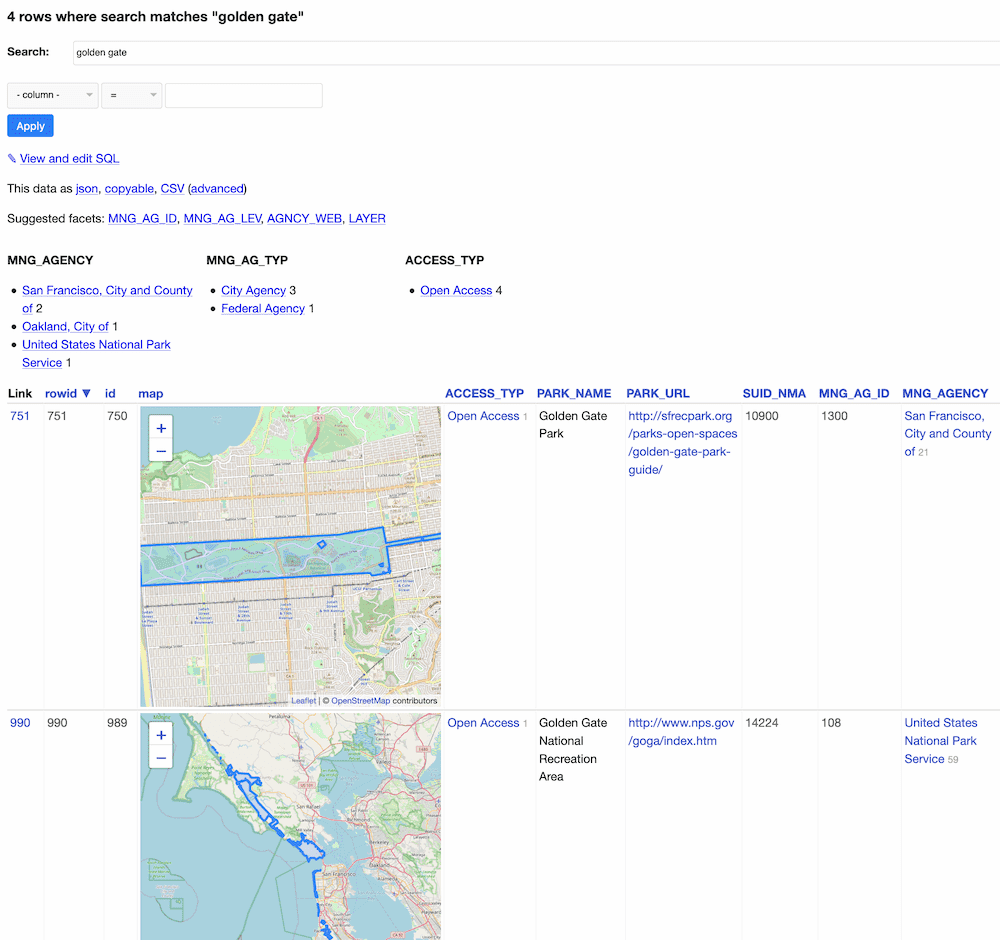 I’m building and deploying the site using this GitHub Actions workflow. It uses conditional-get (see here) combined with the GitHub Actions cache to download the shapefiles as part of the workflow run only if the downloadable file has changed.

This project inspired some improvements to the underlying tools:

I’m trying to get better at releasing 1.0 versions of my software.

For me, the most significant thing about a 1.0 is that it represents a promise to avoid making backwards incompatible releases until a 2.0. And ideally I’d like to avoid ever releasing 2.0s—my perfect project would keep incrementing 1.x dot-releases forever.

Datasette is currently at version 0.48, nearly three years after its first release. I’m actively working towards the 1.0 milestone for it but it may be a while before I get there.

datasette-graphql is less than a month old, but I’ve decided to break my habits and have some conviction in where I’ve got to. I shipped datasette-graphql 1.0 a few days ago, closely followed by a 1.0.1 release with improved documentation.

I’m actually pretty confident that the functionality baked into 1.0 is stable enough to make a commitment to supporting it. It’s a relatively tight feature set which directly maps database tables, filter operations and individual rows to GraphQL. If you want to quickly start trying out GraphQL against data that you can represent in SQLite I think it’s a very compelling option.

Improvements to my TILs

My til.simonwillison.net site provides a search engine and browse engine over the TIL notes I’ve been accumulating in simonw/til on GitHub.

The site used to link directly to rendered Markdown in GitHub, but that has some disadvantages: most notably, I can’t control the <title> tag on that page so it has poor implications for SEO.

This week I switched it over to hosting each TIL as a page directly on the site itself.

Then I realized that GitHub provide an API for rendering Markdown using the same pipeline they use on their own site.

So now the build script for the SQLite database that powers my TILs site runs each document through that API, but only if it has changed since the last time the site was built.

I wrote some notes on using their Markdown API in this TIL: Rendering Markdown with the GitHub Markdown API.

Storing the rendered HTML in my database also meant I could finally fix a bug with the Atom feed for that site, where advanced Markdown syntax wasn’t being correctly rendered in the feed.

The datasette-atom plugin I use to generate the feed applies Mozilla’s Bleach HTML sanitization library to avoid dynamically generated feeds accidentally becoming a vector for XSS. To support the full range of GitHub’s Markdown in my feeds I released version 0.7 of the plugin with a deliberately verbose allow_unsafe_html_in_canned_queries plugin setting which can opt canned queries out of the escaping—which should be safe because a canned query running against trusted data gives the site author total control over what might make it into the feed.

I’m spinning up work again on Datasette Cloud again, after several months running it as a private alpha. My next key milestone is to be able to charge subscribers money—I know from experience that until you’re charging people actual money it’s very difficult to be confident that you’re working on the right things.

This is Weeknotes: California Protected Areas in Datasette by Simon Willison, posted on 28th August 2020.