Building an Evernote to SQLite exporter

I’ve been using Evernote for over a decade, and I’ve long wanted to export my data from it so I can do interesting things with it.

Ideally I’d use their API for that, so I could continually export new notes via a cron. Unfortunately the API is implemented using Thrift (the only public API I’ve seen to use that) and my attempts to speak to it from Python have so far failed to get anywhere.

Last weekend I decided to try using their “Export notes” feature instead, and its ENEX XML format.

These files can get BIG, because any images attached to your notes will be embedded as base64 encoded binary data within the XML. My export is 2.8GB!

When faced with unknown XML like this it’s useful to get a high level overview of what tags are present. in 2009 I wrote a Python script for this—as part of this project I updated it for Python 3 and pushed a release to PyPI.

Here’s a subset of the output when run against my Notes.enex file (full output is here).

This shows me that every note is represented as a <note> element, and crucial metadata lives in children of a <note-attributes> child element.

(I thought I’d need to tweak the script for performance since it works by loading the entire file into memory, but my laptop has 32GB of RAM so it didn’t even blink.)

I ran into some significant limitations while working with my ENEX export.

That last limitation—the lack of unique IDs—is a huge pain. It means that any export is by necessity a one-time operation—if you edit a note and attempt a re-export you will get a brand new record that can’t be automatically used to update the previous one.

This is particularly frustrating because I know that Evernote assigns a GUID to each note—they just don’t include them in the export file.

My Dogsheep family of tools aims to liberate personal data from all kinds of different sources and convert it into SQLite, which means I can explore, query and visualize it using Datasette.

dogsheep/evernote-to-sqlite is my latest entry in that series.

I based it on healthkit-to-sqlite because that, too, has to deal with a multiple GB XML file. Both tools use the Python standard library’s XMLPullParser, which makes XML elements available as a stream without needing to load the entire file into memory at once.

The conversion code is here. It ended up being relatively straight-forward, using ElementTree to extract data from the XML and sqlite-utils to write it to a database.

It implements a progress bar by tracking the number of bytes that have been read from the underlying file XML.

One optimization: originally I created a single resources table with the resource metadata and a BLOB column containing the binary image contents.

This table was huge—over a GB—and had very poor performance for operations such as querying and faceting across unindexed columns—because any table scan had to work through MBs of binary data.

My personal Evernote notebook has around 2,000 resources. 2,000 rows of metadata should usually be very fast to query.

So... I split the binary data out into a two column resources_data table—md5 primary key and a BLOB for data. This massively sped up queries against that resources table.

And it works! Running the following command produces a SQLite database file containing all of my notes, note metadata and embedded images:

Figuring out the best way to serve up the note content in Datasette is still a work in progress—but I’ve hacked together a delightfully terrible way of doing this using a one-off plugin.

Datasette plugins are usually packaged and installed via PyPI, but there’s an alternative option for plugins that don’t warrant distribution: create a plugins/ directory, drop in one or more Python files and start Datasette pointing --plugins-dir at that directory.

This is great for hacking on terrible ideas. Here’s the evernote.py plugin I wrote in full:

render_cell() is called every time Datasette’s interface renders the value of a column. Here I’m looking for the <en-note> and </en-note> tags and, if they are present, stripping them off and marking their inner content as safe to display using jinja2.Markup() (without this they would be automatically HTML esacped).

extra_body_script() can be used to inject additional JavaScript at the bottom of the page. I’m injecting some particularly devious JavaScript which scans the page for Evernote’s <en-media> tags and, if it finds any, runs a fetch() to get the base64-encoded data from Datasette and then injects that into the page as a 300px wide image element using a data: URI.

Like I said, this is a pretty terrifying hack! But it works just fine, and my notes are now visible inside my personal Datasette instance: 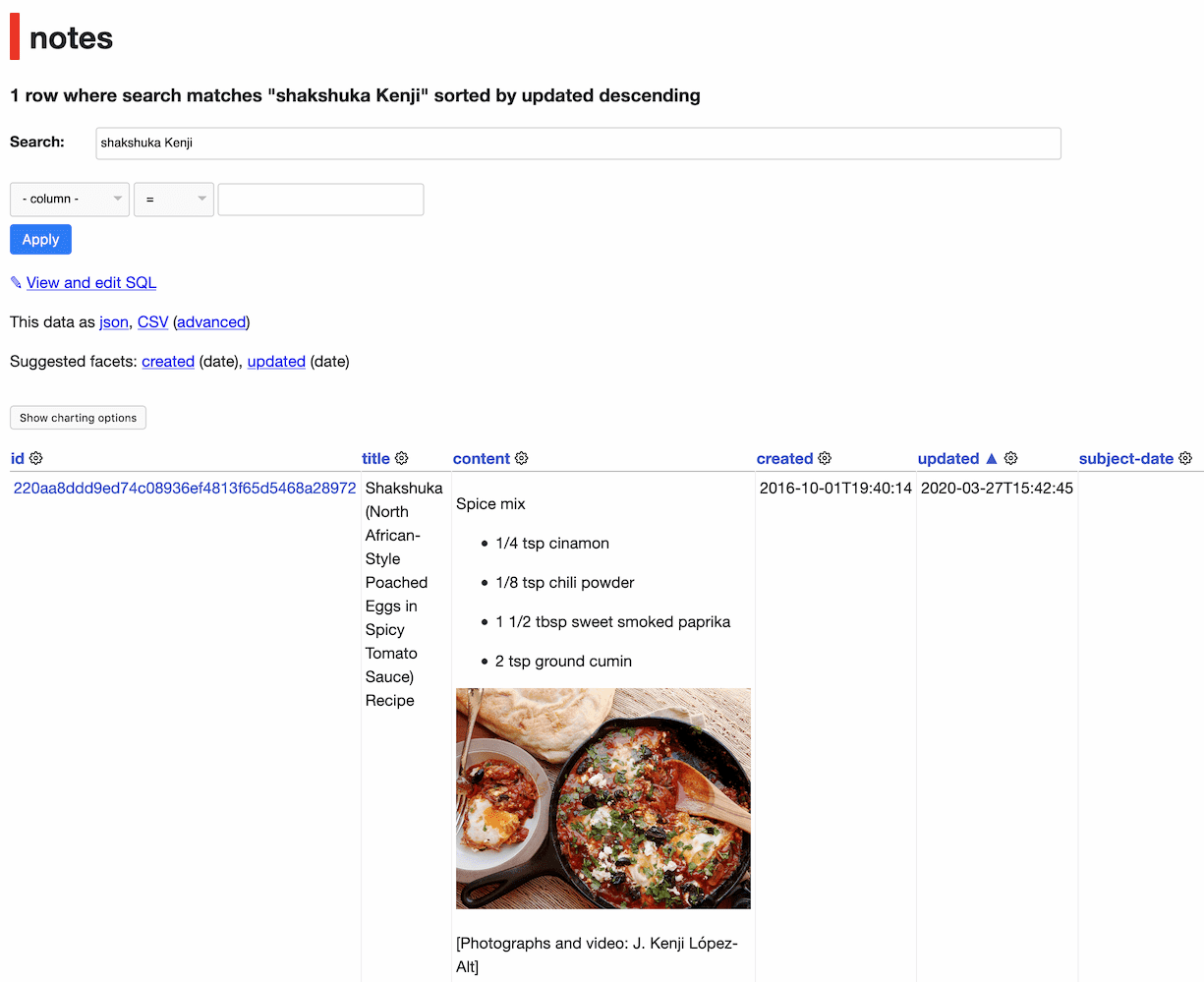 An interesting feature of Evernote is that it runs cloud-based OCR against images in your notes, enabling you to search across the text contained within them.

It turns out the output of this OCR process is included in the export XML. It looks like this:

evernote-to-sqlite creates a searchable ocr text field using values from that XML, so I can search my images in Datasette.

This is Building an Evernote to SQLite exporter by Simon Willison, posted on 16th October 2020.

I wrote up some of the details of building evernote-to-sqlite on my blog: https://t.co/xPGrxQIo6e