I’ve deployed a demo version of the application here:

The demo runs searches against the source code of every one of my GitHub repositories that start with datasette—61 repos right now—so it should include all of my Datasette plugins plus the core Datasette repository itself.

Since it’s running on top of ripgrep, it supports regular expressions. This is absurdly useful. Some examples:

I usually run ripgrep as rg on the command-line, or use it within Visual Studio Code (fun fact: the reason VS Code’s “Find in Files” is so good is it’s running ripgrep under the hood).

So why have it as a web application? Because this means I can link to it, bookmark it and use it on my phone. 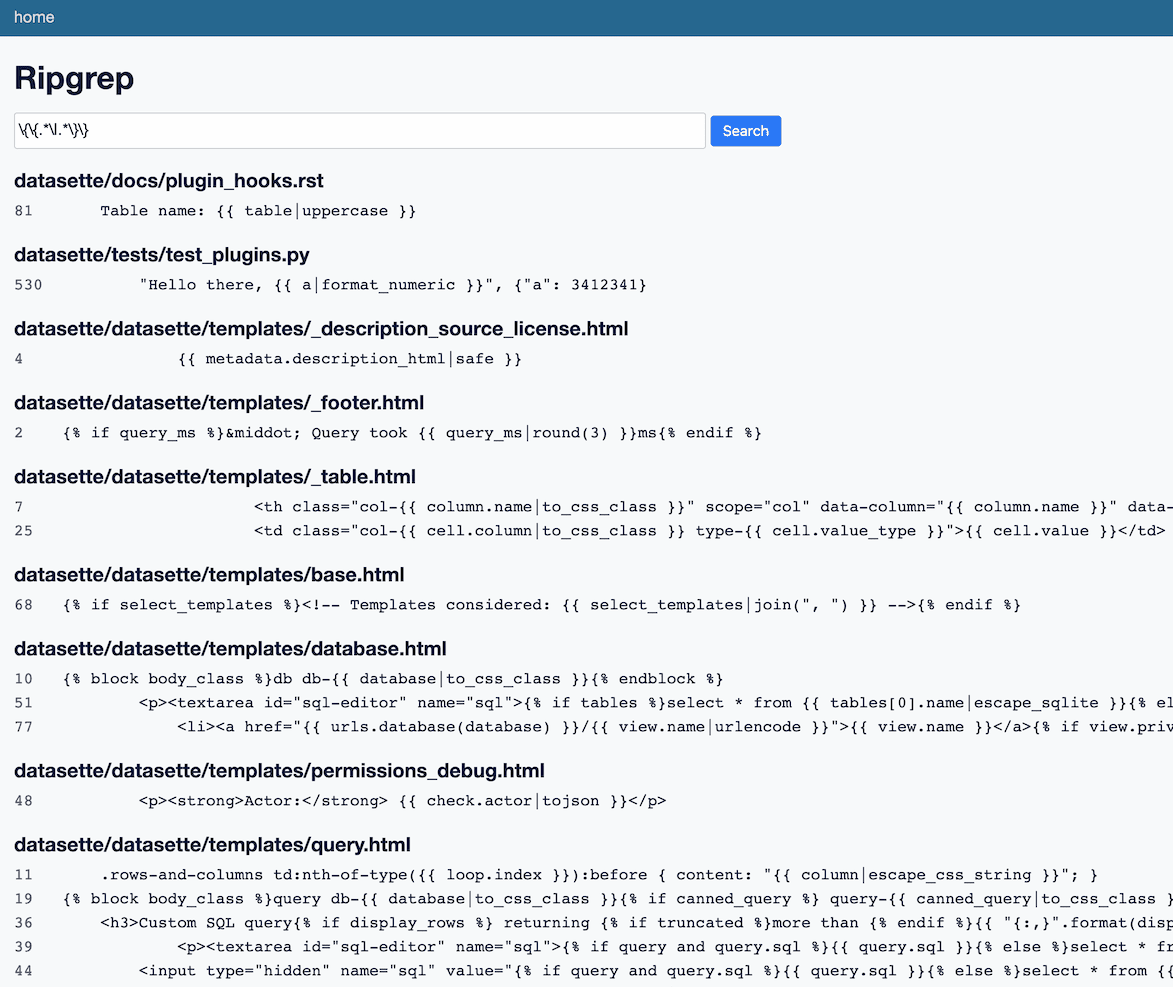 There are plenty of great existing code search tools out there already: I’ve heard great things about livegrep, and a quick Google search shows a bunch of other options.

Aside from being a fun project, datasette-ripgrep has one key advantage: it gets to benefit from Datasette’s publishing mechanism, which means it’s really easy to deploy.

That ripgrep.datasette.io demo is deployed by checking out the source code to be searched into a all directory and then using the following command:

all is a folder containing the source code to be searched. metadata.json contains this:

That’s all there is to it! The result is a deployed code search engine, running on Google Cloud Run.

(If you want to try this yourself you’ll need to be using the just-released Datasette 0.52.)

The GitHub Action workflow that deploys the demo also uses my github-to-sqlite tool to fetch my repos and then shallow-clones the ones that begin with datasette.

If you have your own Google Cloud Run credentials, you can run your own copy of that workflow against your own repositories.

A different kind of Datasette plugin

Datasette is a tool for publishing SQLite databases, so most Datasette plugins integrate with SQLite in some way.

datasette-ripgrep is different: it makes no use of SQLite at all, but instead takes advantage of Datasette’s URL routing, datasette publish deployments and permissions system.

The plugin implementation is currently 134 lines of code, excluding tests and templates.

While the plugin doesn’t use SQLite, it does share a common philosophy with Datasette: the plugin bundles the source code that it is going to search as part of the deployed application, in a similar way to how Datasette usually bundles one or more SQLite database files.

As such, it’s extremely inexpensive to run and can be deployed to serverless hosting. If you need to scale it, you can run more copies.

This does mean that the application needs to be re-deployed to pick up changes to the searchable code. I’ll probably set my demo to do this on a daily basis.

The trickiest part of the implementation was figuring out how to use Python’s asyncio.create_subprocess_exec() method to safely run the rg process in response to incoming requests.

I don’t want expensive searches to tie up the server, so I implemented two limits here. The first is a time limit: by default, searches have a second to run after which the rg process will be terminated and only results recieved so far will be returned. This is achieved using the asyncio.wait_for() function.

I also implemented a limit on the number of matching lines that can be returned, defaulting to 2,000. Any more than that and the process is terminated early.

Both of these limits can be customized using plugin settings (documented in the README). You can see how they are implemented in the async def run_ripgrep(pattern, path, time_limit=1.0, max_lines=2000) function.

The other fun implementation detail is the way the source code listings are displayed. I’m using CSS to display the line numbers in a way that makes them visible without them breaking copy-and-paste (inspired by this article by Sylvain Durand).

I wanted to imitate GitHub’s handling of line links, where adding #L23 to the URL both jumps to that line and causes the line to be highlighted. Here’s a demo of that—I use the following JavaScript to update the contents of a <style id="highlightStyle"></style> element in the document head any time the URL fragment changes:

It’s the simplest way I could think of to achieve this effect.

Update 28th November 2020: Louis Lévêque on Twitter suggested using the CSS :target selector instead, which is indeed MUCH simpler—I deleted the above JavaScript and replaced it with this CSS:

Next steps for this project

I’m pleased to have got datasette-ripgrep to a workable state, and I’m looking forward to using it to answer questions about the growing Datasette ecosystem. I don’t know how much more time I’ll invest in this—if it proves useful then I may well expand it.

I do think there’s something really interesting about being able to spin up this kind of code search engine on demand using datasette publish. It feels like a very useful trick to have access to.

Better URLs for my TILs

My other project this week was an upgrade to til.simonwillison.net: I finally spent the time to design nicer URLs for the site.

The implementation for this takes advantage of a feature I sneaked into Datasette 0.49: Path parameters for custom page templates. I can create a template file called pages/{topic}/{slug}.html and Datasette use that template to handle 404 errors that match that pattern.

Here’s the new pages/{topic}/{slug}.html template for my TIL site. It uses the sql() template function from the datasette-template-sql plugin to retrieve and render the matching TIL, or raises a 404 if no TIL can be found.

I also needed to setup redirects from the old pages to the new ones. I wrote a TIL on edirects for Datasette explaining how I did that.

This is datasette-ripgrep: deploy a regular expression search engine for your source code by Simon Willison, posted on 28th November 2020.