datasette-ripgrep (introduced last week) landed on Hacker News, and the comments there inspired me to build a few new features. The interface looks like this now: 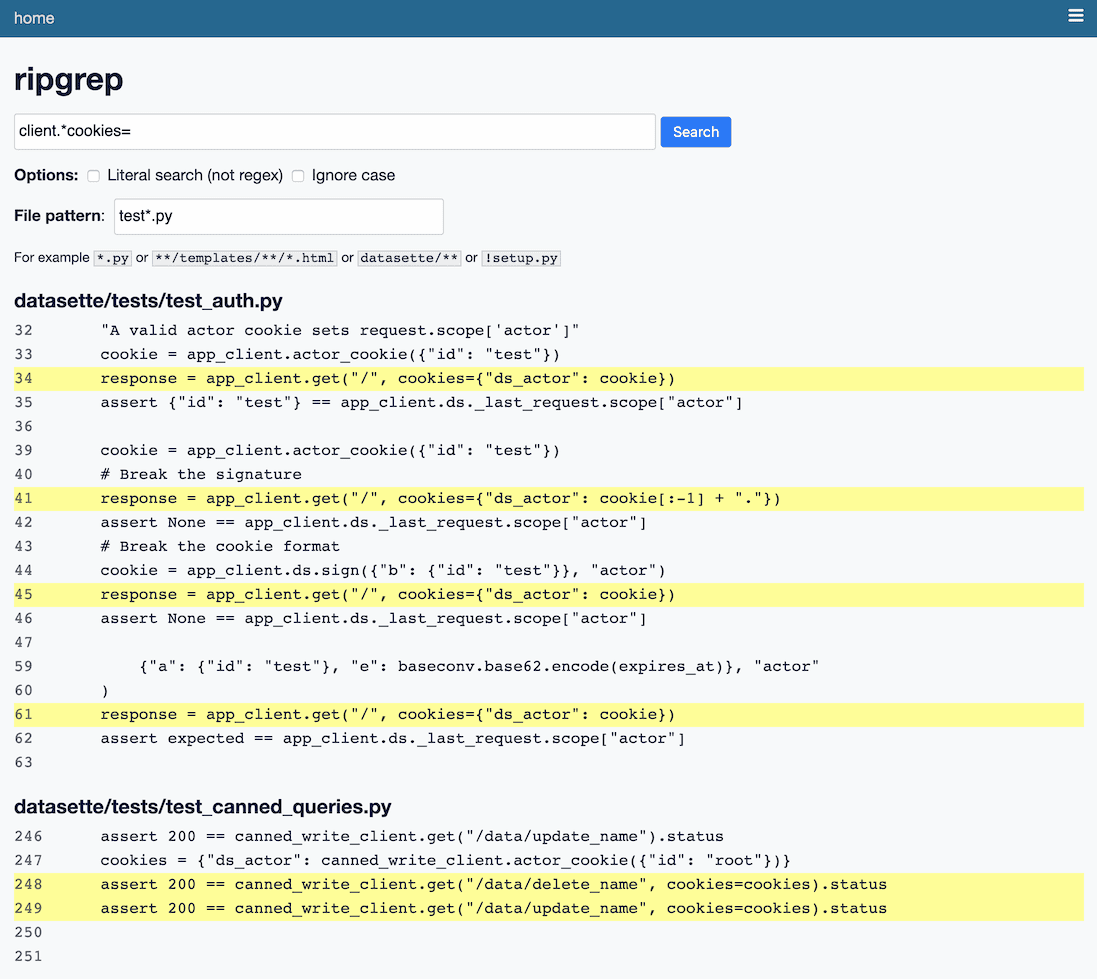 I added options for literal searches (as opposed to a regex match) and ignoring case, and a field that lets you filter to just a specific file pattern, for example test*.py.

These are already features of ripgrep so adding them was a case of hooking up the interface and using it to modify the command-line arguments passed to the underlying tool.

github-to-sqlite is my command-line tool for importing data from the GitHub API into a SQLite database, for analysis with Datasette.

The new workflows command can be run against one or more repositories and will fetch their GitHub Actions workflow YAML files, parse them and use them to populate new database tables called workflows, jobs and steps.

If you run workflows across a bunch of different repositories this means you can analyze your workflow usage using SQL!

My github-to-sqlite demo now includes workflows from my core Datasette and Dogsheep projects. Some example queries:

The implementation is a good example of my sqlite-utils library in action—I pass the extracted YAML data straight to the .insert(data, alter=True) method which creates the correct table schema automatically, altering it if there are any missing columns.

datasette-graphql 1.3 has one tiny feature which I find enormously satisfying.

The plugin provides a GraphQL interface to any table in Datasette. The latest versions use the new “table actions” menu (accessible through a cog icon in the page heading) to provide a link to an example query for that table.

The new foreign key references include the repo, author and committer fields. The example query now demonstrates the most interesting feature of datasette-graphql—its ability to automatically convert foreign key relationships in your database into nested GraphQL fields.

It’s a small change, but it makes me really happy.

I shipped Datasette 0.52, a relatively minor release which mainly kicked off an effort to rebrand “configuration” as “settings”.

I’m doing this as part of my effort to fix Datasette’s “metadata” concept. The metadata.json file started out as a way to add metadata—title, description, license and source information. Over time the file expanded to cover things like default facet displays and sort orders... and then when plugins came along it grew to cover plugin configuration as well.

This is really confusing. Editing metadata.json to configure a plugin doesn’t make a great deal of sense.

For Datasette 1.0 I want to clean this up. I’m planning on splitting metadata and configuration into separate mechanisms.

There’s just one problem: Datasette already has a “configuration” concept in the form of the --config command-line option which can be used to set some very fundamental options for the Datasette server—things like the SQL time limit and the maximum allowed CSV download size.

I want to call plugin configuration settings “configuration”, so I’ve renamed --config to --settings—see the new settings documentation for details.

This also gave me the chance to clean up a weird design decision. Datasette’s configuration options looked like this:

Note the lack of a colon here—having an option take two arguments is a perfectly cromulent way of using Click, but it’s one I wasn’t aware of when I first released Datasette.

The old --config mechanism continues to work, but it now displays a deprecation warning—it will be removed in Datasette 1.0.

0.52 has already had more dot-releases than any other version of Datasette. These are all pure bug fixes, mostly for obscure bugs that are unlikely to have affected anyone. To summarize the release notes:

My personal Dogsheep broke this week. I’ve been running it on an Amazon Lightsail instance, and this week I learned that Lightsail has a baseline CPU mechanism which grants your instance burst capacity but shuts it down if it exceeds that capacity too often!

So I’m moving it to a DigitalOcean droplet which won’t do that, and trying to figure out enough Ansible to completely automate the process.

My ideal server is one that is configured entirely from files in source control, and updates itself by pulling new configuration from that repository. I plan to use ansible-pull for this, once I’ve put together the necessary playbooks.