I’ve been exploring an architectural pattern for publishing websites over the past few years that I call the “Baked Data” pattern. It provides many of the advantages of static site generators while avoiding most of their limitations. I think it deserves to be used more widely.

I define the Baked Data architectural pattern as the following:

Baked Data: bundling a read-only copy of your data alongside the code for your application, as part of the same deployment

Most dynamic websites keep their code and data separate: the code runs on an application server, the data lives independently in some kind of external data store—something like PostgreSQL, MySQL or MongoDB.

With Baked Data, the data is deployed as part of the application bundle. Any time the content changes, a fresh copy of the site is deployed that includes those updates.

I mostly use SQLite database files for this, but plenty of other formats can work here too.

Since every change to the data results in a fresh deployment this pattern doesn’t work for sites that change often—but in my experience many content-oriented sites update their content at most a few times a day. Consider blogs, documentation sites, project websites—anything where content is edited by a small group of authors.

Why would you want to apply this pattern? A few reasons:

How to bake your data

My initial implementations of Baked Data have all used SQLite. It’s an ideal format for this kind of application: a single binary file which can store anything that can be represented as relational tables, JSON documents or binary objects—essentially anything at all.

Any format that can be read from disk by your dynamic server-side code will work too: YAML or CSV files, Berkeley DB files, or anything else that can be represented by a bucket of read-only bytes in a file on disk.

[I have a hunch that you could even use something like PostgreSQL, MySQL or Elasticsearch by packaging up their on-disk representations and shipping them as part of a Docker container, but I’ve not tried that myself yet.]

Once your data is available in a file, your application code can read from that file and use it to generate and return web pages.

You can write code that does this in any server-side language. I use Python, usually with my Datasette application server which can read from a SQLite database file and use Jinja templates to generate pages.

The final piece of the puzzle is a build and deploy script. I use GitHub Actions for this, but any CI tool will work well here. The script builds the site content into a deployable asset, then deploys that asset along with the application code to a hosting platform.

The most sophisticated Baked Data site I’ve published myself is the official website for my Datasette project, datasette.io—source code in this repo. 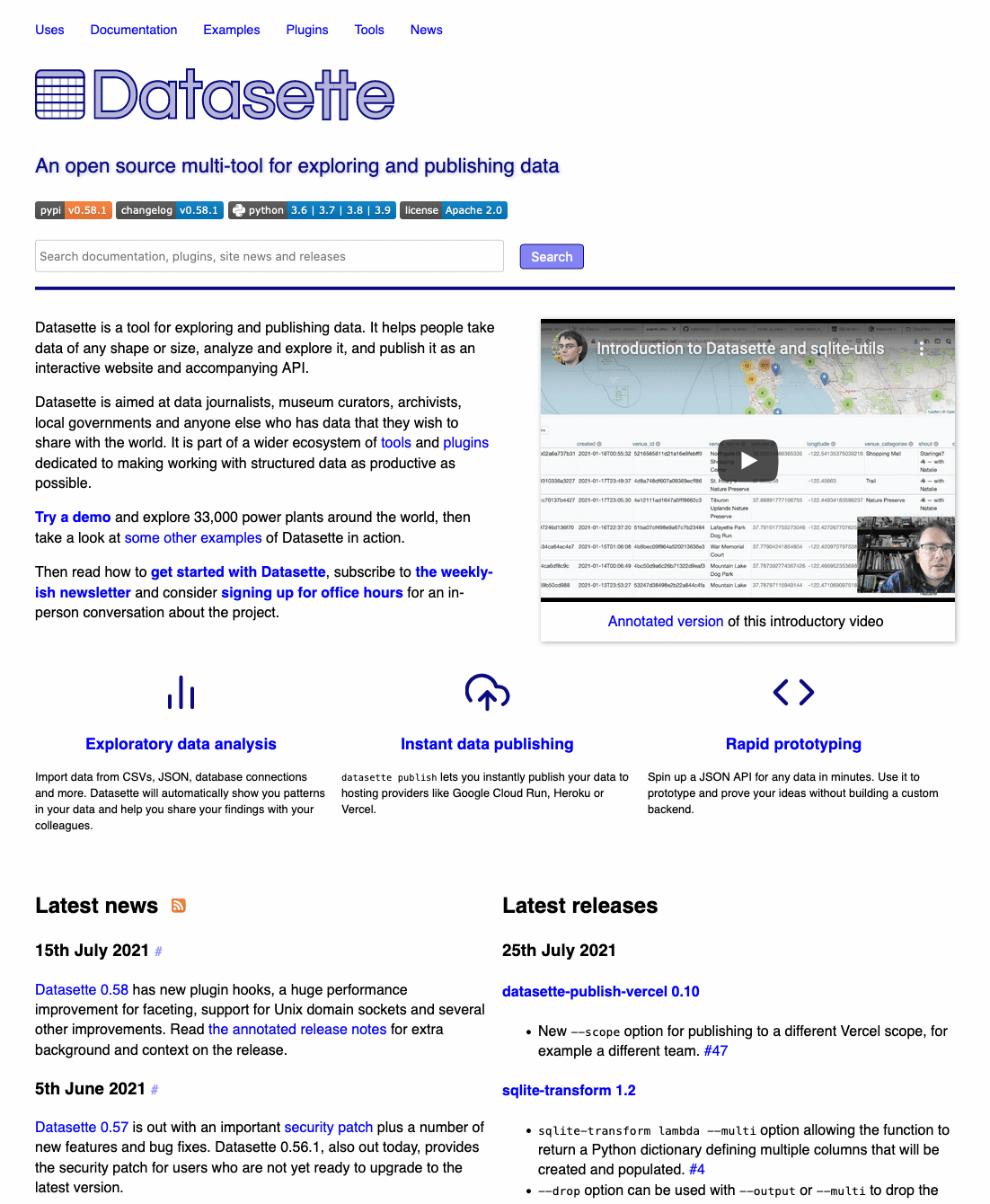 The site is deployed using Cloud Run. It’s actually a heavily customized Datasette instance, using a custom template for the homepage, custom pages for other parts of the site and the datasette-template-sql plugin to execute SQL queries and display their results from those templates.

The site is automatically deployed once a day by a scheduled action, and I can also manually trigger that action if I want to ensure a new software release is reflected on the homepage.

Other real-world examples of Baked Data

My favourite example of this pattern in a site that I haven’t worked on myself is Mozilla.org.

They started using SQLite back in 2018 in a system they call Bedrock—Paul McLanahan provides a detailed description of how this works.

Their site content lives in a ~22MB SQLite database file, which is built and uploaded to S3 and then downloaded on a regular basis to each of their application servers.

You can view their healthcheck page to see when the database was last downloaded, and grab a copy of the SQLite file yourself. It’s fun to explore that using Datasette: 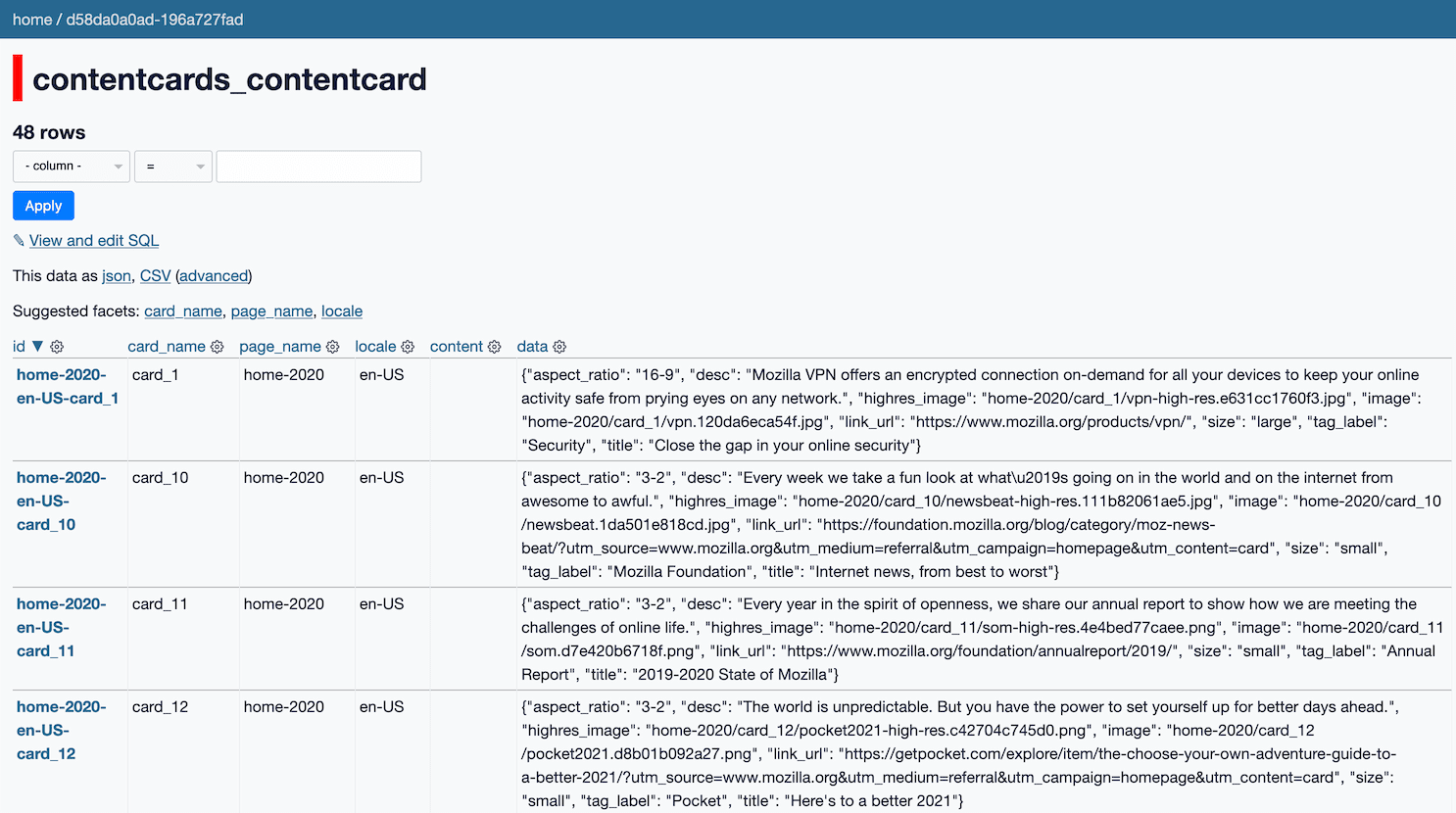 Static site generators have exploded in popularity over the past ten years. They drive the cost of hosting a site down to almost nothing, provide excellent performance, work well with CDNs and produce sites that are extremely unlikely to break.

Used carefully, the Baked Data keeps most of these characteristics while still enabling server-side code execution.

My example sites use this in a few different ways:

A common complaint about static site generators when used for larger sites is that build times can get pretty long if the builder has to generate tens of thousands of pages.

With Baked Data, 10,000 pages can be generated by a single template file and 10,000 rows in a SQLite database table.

This also makes for a faster iteration cycle during development: you can edit a template and hit “refresh” to see any page rendered by the new template instantly, without needing to rebuild any pages.

Want to give this a go?

If you want to give the Baked Data pattern a try, I recommend starting out using the combination of Datasette, GitHub Actions and Vercel. Hopefully the examples I’ve provided above are a good starting point—also feel free to reach out to me on Twitter or in the Datasette Discussions forum with any questions.

This is The Baked Data architectural pattern by Simon Willison, posted on 28th July 2021.

Previous: Datasette - an ecosystem of tools for working with small data