Building a desktop application for Datasette (and weeknotes)

This week I started experimenting with a desktop application version of Datasette—with the goal of providing people who aren’t comfortable with the command-line the ability to get Datasette up and running on their own personal computers.

Update 8th September 2021: I made a bunch more progress over the week following this post, see Datasette Desktop—a macOS desktop application for Datasette for details or download the app to try it out. 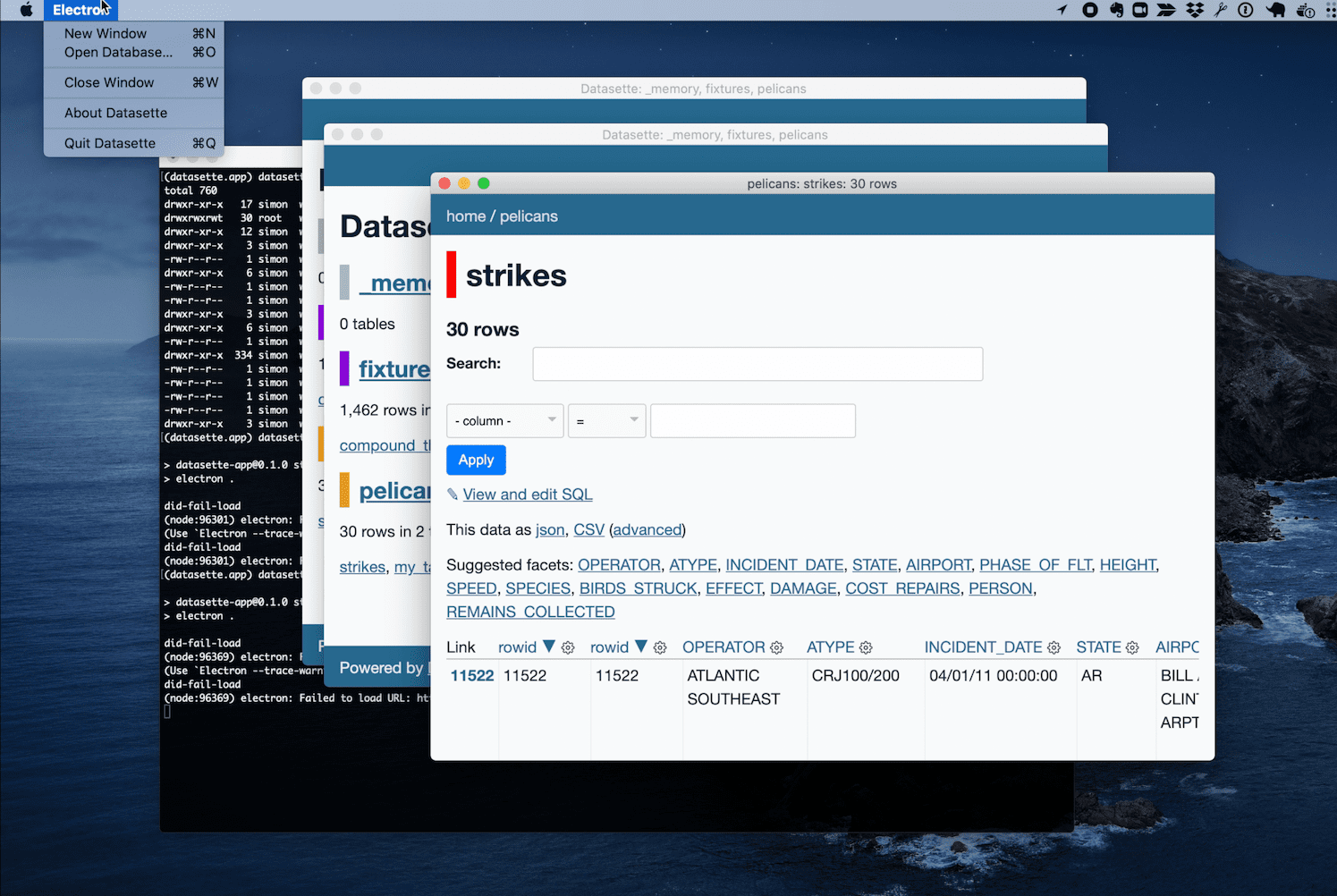 Why a desktop application?

On Monday I kicked off an enormous Twitter conversation when I posted:

This ties into my single biggest complaint about Python: it’s just too hard for people to get started with. Setting up a Python development environment for the first time remains an enormous barrier to entry.

The more I think about this the more frustrated I get, thinking about the enormous amount of human potential that’s squandered because the barriers to getting started learning to program are so much higher than they need to be

Which made me think of glass houses. My own Datasette project has exactly the same problem: to run it locally you need to install Python and then install Datasette! Mac users can use Homebrew, but telling newcomers to install Homebrew first isn’t particularly welcoming either.

Ideally, I’d like people to be able to install a regular desktop application and start using Datasette that way, without even needing to know that it’s written in Python.

There’s been an open issue to get Datasette running as a standalone binary using PyInstaller since November 2017, with quite a bit of research.

But I want a UI as well: I don’t want to have to teach new users how to install and run a command-line application if I can avoid it.

So I decided to spend some time researching Electron to see how hard it would be to make a basic Datasette desktop application a reality.

The code I’ve written so far can be found in the simonw/datasette.app repository on GitHub. The app so far does the following:

Here’s a video demo showing these features in action:

It’s very much an MVP, but I’m encouraged by the progress so far. I think this is enough of a proof of concept to be worth turning this into an actual usable product.

How this all works

There are two components to the application.

The first is a thin Electron shell, responsible for launching the Python server, managing windows and configuring the various desktop menu options used to configure it. The code for that lives in main.js.

The second is a custom Datasette plugin that adds extra functionality needed by the application. Currently this consists of a tiny bit of extra CSS to make the footer stick to the bottom of the window, and a custom API endpoint at /-/open-database-file which is called by the menu option for opening a new database.

I know it’s cool to knock Electron, but in this case it feels like exactly the right tool for the job. Datasette is already a web application—what I need is a way to hide the configuration of that web application behind an icon, and re-present the interface in a way that feels more like a desktop application.

This is my first time building anything with Electron—here are some of my initial impressions.

Up next: packaging the app

I was hoping to get to this before writing up my progress in these weeknotes, but it looks like it’s going to be quite a challenge.

In order to produce an installable macOS app (I’ll dive into Windows later) I need to do the following:

I’m expecting figuring this out to be a long-winded and frustrating experience, which is more the fault of Apple than of Electron. I’m tracking my progress on this in issue #7.

I pushed out a new alpha of Datasette earlier this week, partly driven by work I was doing on datasette.app.

I released a new plugin that exercises this hook called datasette-verify. Past experience has shown me that it’s crucial to ship an example plugin alongside a new hook, to help confirm that the hook design is fit for purpose.

It turns out I didn’t need this for datasette.app after all, but it’s still a great capability to have!

Quoting the release notes in full:

As a follow-up to last week’s work on my personal Dogsheep, I decided to re-import my Evernote notes... and found out that Evernote has changed their export mechanism in ways that broke my tool. Most concerningly their exported XML is even less well-formed than it used to be. This new release works around that.

This is Building a desktop application for Datasette (and weeknotes) by Simon Willison, posted on 30th August 2021.

Next: Datasette Desktop - a macOS desktop application for Datasette

Building a desktop application for Datasette - my progress so far researching a proof-of-concept Electron app wrapping Datasette, for ease of installation by new users https://t.co/9arCNKwJK1