Shorter weeknotes this week, because my main project for the week warrants a detailed write-up on its own (coming soon... update 21st May here it is).

I released Datasette 0.41 this morning. Highlights include:

A late addition to the release—thought of and implemented just this morning, as the result of this TIL, is the ability to use various SQLite PRAGMA functions.

But... SQLite provides access to a number of useful introspection capabilities through a collection of PRAGMA functions. Things like this:

These are harmless—the SQLite documentation specifically states that “Table-valued functions exist only for PRAGMAs that return results and that have no side-effects”.

SO I enabled them using a negative lookahead assertion in the regular expression that prevents PRAGMA from being used:

The regular expression here is dynamically composed from the list of allowed PRAGMA functions—it looks something like this:

In Python regular expressions pragme(?!_foo) means "pragma but only if not followed by _foo".

With PRAGMA functions support shipped in Datasette 0.41 it’s now possible to make use of them in queries. Here’s an example query which finds all foreign key relationships in a database:

Here’s that query run against my github-to-sqlite demo database. Exported as JSON, the results look like this:

I used this to put together an Observable Notebook which takes this data (from any public Datasette instance if you provide it with a URL) and renders those relationships as a force-directed graph using D3. 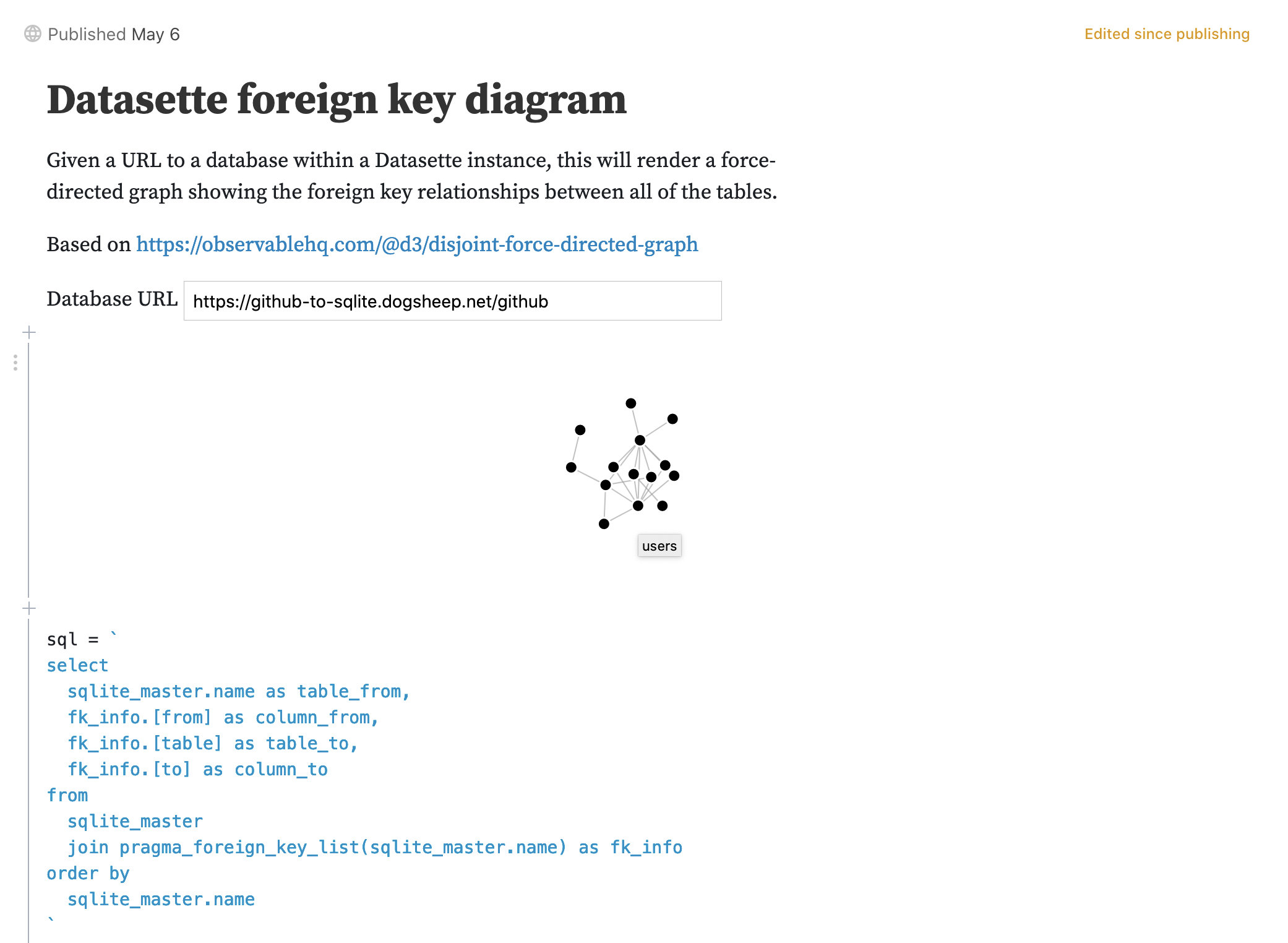 I’ll write about this more in a separate post, but I had a huge breakthrough with my photos-to-sqlite project this week.

The goal of the project is to give my SQL access to the photos I’ve taken. I use Apple Photos for this, and my holy grail has always been the metadata that Apple generate around my photos using machine learning.

Apple run sophisticated label classification against my photos on device—so if I search for “dog” they show me all of the photos I’ve taken of dogs. I was certain that this information was in a SQLite database somewhere, and this week I finally figured out where: the ~/Pictures/Photos\ Library.photoslibrary/database/search/psi.sqlite file.

After a whole lot of digging around I worked out how to join it against my photos database, and as a result I can now run SQL queries that select all of my photos of dogs! Or seals! Or pelicans!

Combine that with some intriguing automated photo quality scores I found (order by ZPLEASANTCOMPOSITIONSCORE is a thing) and my Dogsheep photos solution is beginning to take shape. I’ll write it up in more detail over the next few days.

My github-to-sqlite demo is updated daily via a scheduled GitHub Action and retrieves all kinds of data about my various Dogsheep projects plus sqlite-utils and Datasette. Being able to see things like the most recent dependent repos across my projects in one place is extremely useful.

This is Weeknotes: Datasette 0.41, photos breakthroughs by Simon Willison, posted on 7th May 2020.

Next: Weeknotes: Working on my screenplay