I released Datasette 0.63 today. These are the annotated release notes.

Python 3.11 came out a few days ago, and one of the highlights of that release was a significant amount of work invested in performance.

Datasette works on (and is tested against) Python 3.7 and higher, but it has a couple of mechanisms that can bake a new Docker container for you. This performance increase was significant enough that I took the time to upgrade those containers to Python 3.11, using the 3.11.0-slim-bullseye base image.

Alex continues to do amazing work documenting the process for building SQLite extensions. It turns out a single extension can offer multiple variants—a trick he uses in some of his own. He contributed this fix to Datasette, and I ported the same feature to sqlite-utils as well.

Suggested by Charles Nepote on the Datasette Discord. Neat for if you’re dealing with larger databases.

Also suggested by Charles. This helps keep cells with giant linked URLs in them readable.

I implemented this partly because I still care how well Datasette works if the JavaScript doesn’t load, but mainly for Datasette Lite, which still doesn’t have a solution for loading JavaScript widgets like the CodeMirror editor used in regular Datasette.

Here’s a demo in Datasette Lite.

I added this in response to a bug report caused by someone misunderstanding the settings and adding an invalid one that got silently ignored. Now Datasette will raise an error if you try to use a setting doesn’t exist, which is a much better user experience.

Charles pointed out that it’s useful to be able to include a descriptive comment at the start of a SQL query, but Datasette was refusing queries that started with a comment.

Fixing this took some regular expression wizardry. Here’s the final expression plus a visualization: 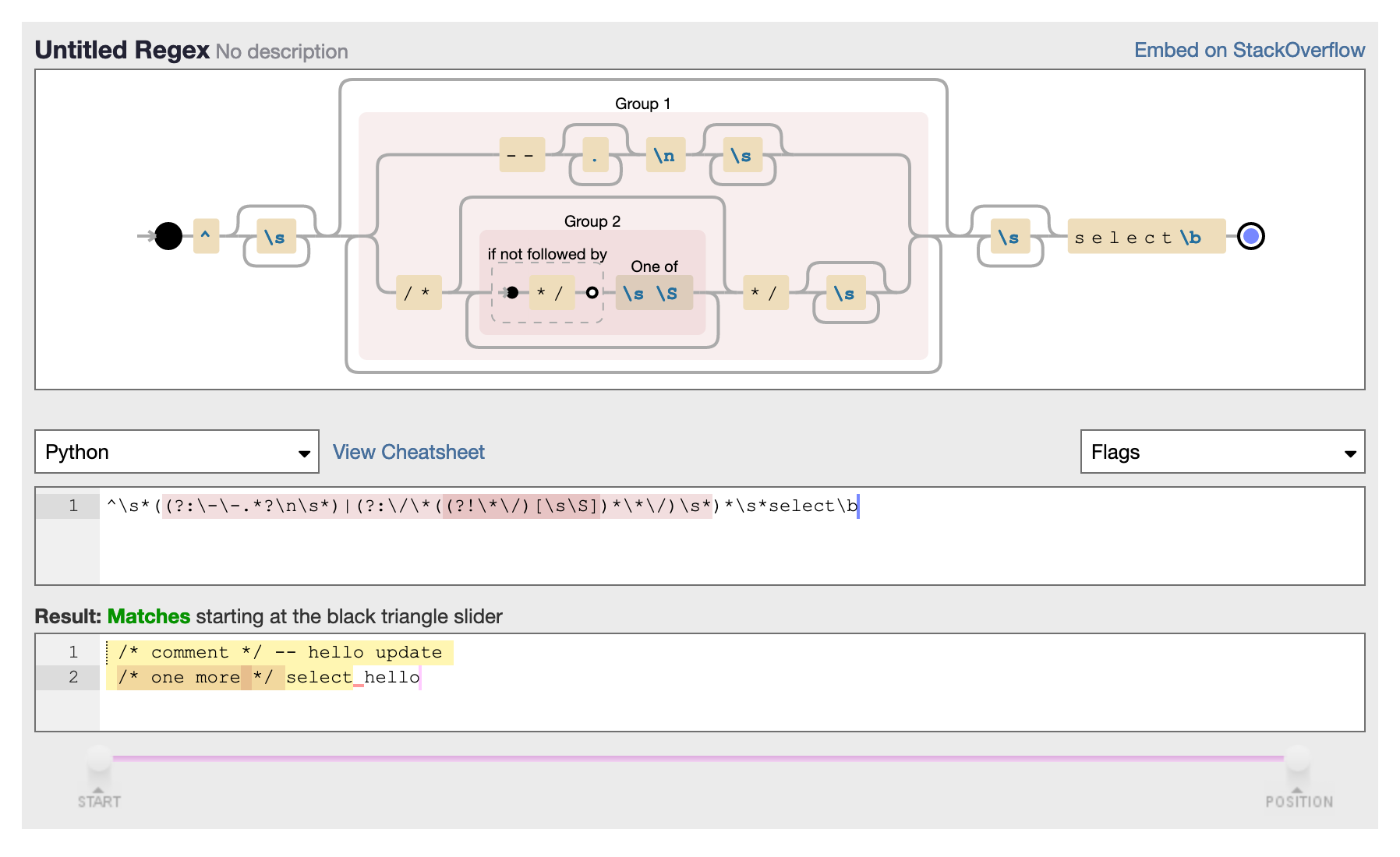 The trickiest part was that I wanted to match comments like this one:

But... I didn’t want to get confused by */ appearing inside a string literal. I wanted to match /* and then any sequence of characters that was NOT the end comment marker (including newlines)—and then */.

That’s what this does:

((?!\*\/)[\s\S]) means “match any sequence of characters that is NOT the end comment marker, multiple times”. \s\S means both whitespace AND non-whitespace characters—it’s a trick for working around the fact that . doesn’t match newline characters.

Previously the error message wouldn’t include the SQL you entered, so you would have to hit “back” to recover your query.

datasette inspect is a pretty obscure Datasette feature. Run it against a SQLite file and it dumps out JSON representing some key statistics—most importantly the number of rows in each table.

If the database is immutable you can then start Datasette with a refererence to that JSON file (using the --inspect-data path option) and Datasette will use that data to save itself from having to count rows when displaying information about the database—a potentially expensive operation.

Forest Gregg spotted a way this could further increase server startup time, by skipping the step where Datasette calculates a hash of the database file since that’s also included in the inspect-data file.

If you start Datasette by pointing it at a directory, datasette path/to/dir, it will now load any *.sqlite or *.sqlite3 files in that directory in addition to any *.db files.

This improvement came out of work I’ve been doing on Datasette Cloud, see previous weeknotes.

When I built the datasette-edit-templates plugin I found myself wanting to access the datasette object inside a prepare_jinja2_environment() plugin hook implementation.

Since datasette wasn’t passed to that hook, I solved it with this horrific piece of stack inspection:

Making datasette available as a parameter there is much nicer!

I hit a bug in datasette-upload-dbs because I’d added extra databases to the Datasette interface in immutable mode by mistake. This API change makes that mistake a lot harder to make.

Another improvement inspired by Datasette Cloud: I noticed that padlock icons weren’t appearing correctly throughout the Datasette interface, where they are meant to indicate that a database, table, view or query is private.

That was because there are actually multiple permission checks involved in deciding if something is private: a user may have access granted at the instance, database or table level.

The code that granted permission was checking all of those, but the code that then checked to see if an anonymous user would be able to see it wasn’t. I fixed that, while maintaining compatibility for older uses of the check_visibility() method.

Henry Schreiner convinced me. See also Semantic Versioning Will Not Save You by Hynek Schlawack.

I’m still worrying about this though.

On the one hand, Datasette can be used as a library as part of a larger application (see this recent Django TIL for an example). As such, pinning requirements is rude: it makes it harder for downstream users to upgrade their dependencies.

But most of the time Datasette is installed as a standalone application—pipx install datasette or brew install datasette for example. In those cases, I’d like to be able to guarantee that the user will get known-to-work versions of every dependency.

I’m still thinking through my options here. I may even break out the core part of Datasette that works as a library into a separate package, so datasette has pinned dependencies but library users can install an unpinned version using a separate package name.

This section stands without explanation I think. I like using the release notes to highlight this kind of thing, including articles that might not be hosted in the core Datasette documentation itself.

This is Datasette 0.63: The annotated release notes by Simon Willison, posted on 27th October 2022.

Next: The Perfect Commit