Datasette 0.59 is out, with a miscellaneous grab-bag of improvements. Here are the annotated release notes.

I’ve been wanting this for ages. Tables consist of columns, and column names very rarely give you enough information to truly understand the associated data. You can now drop extra column definitions into your metadata.json like so:

The LA Times publish a meticulous data dictionary for the 46 CSV and GeoJSON files that they maintain tracking the pandemic in their california-coronavirus-data GitHub repository.

To demonstrate the new column metadata feature, I wrote a script that converts their Markdown data dictionary into Datasette’s metadata format and publishes it along with imported CSV data from their repository.

You can explore the result at covid-19.datasettes.com/la-times—here’s their cdcr-prison-totals table tracking Covid cases in prisons operated by the California Department of Corrections and Rehabilitation. 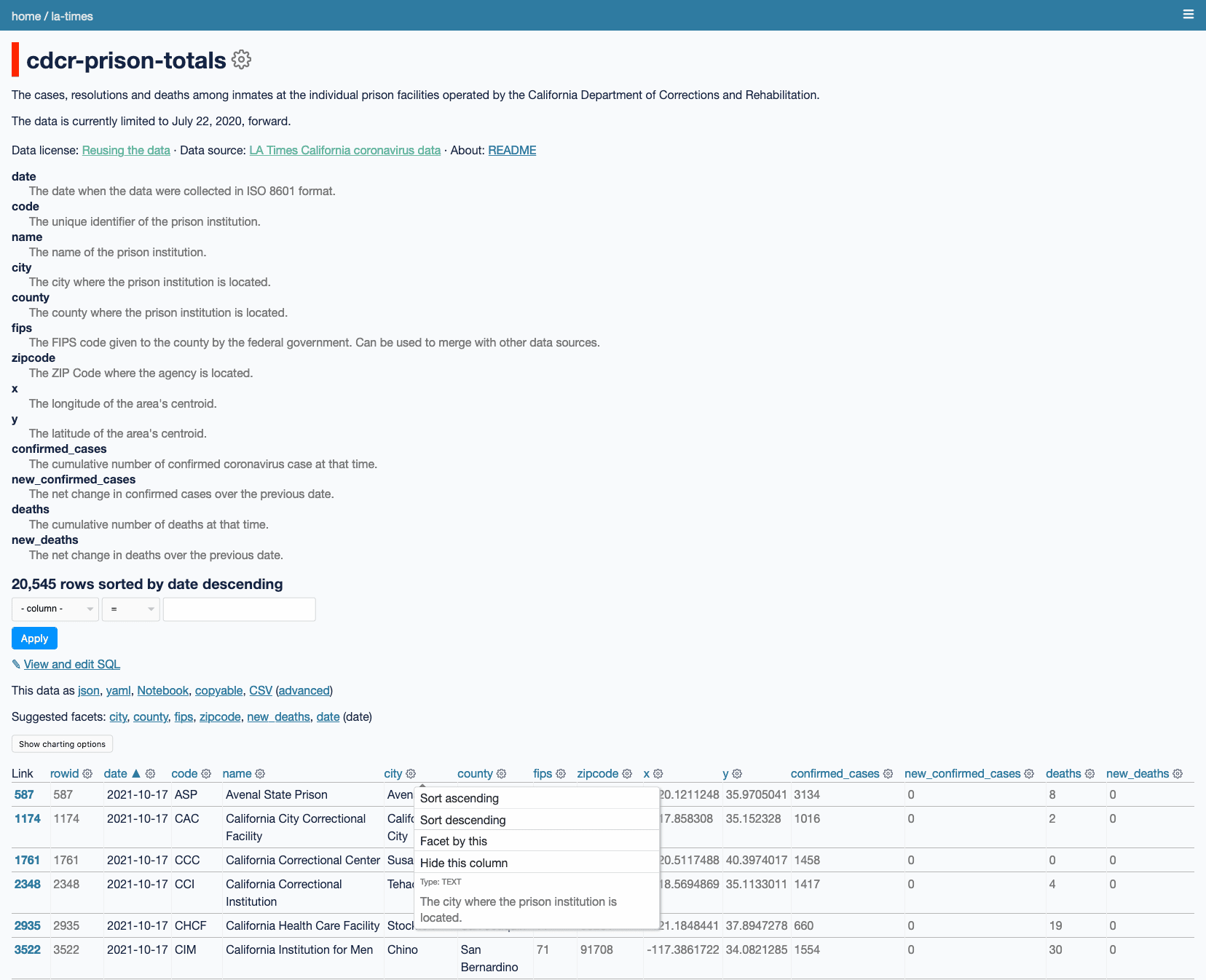 I originally built this because I thought I would need it for Datasette Desktop, then found it wasn’t necessary for that project after all.

I held off on implementing this for quite a while on the basis that plugins which needed their own CLI interface could implement one entirely separately as a Click-based CLI app—dogsheep-beta implements this pattern, offering both a dogsheep-beta index command and registering itself as a Datasette plugin.

The problem with plugins implementing their own separate CLI commands is that users then need to understand where they have been installed. Datasette is designed to work well with virtual environments, but if a plugin is installed into a virtual environment I can’t guarantee that any CLI tools it includes will execute when the user types their name.

Now that plugins can register datasette subcommand subcommands this problem has a solution: provided users can run datasette they’ll also be able to run CLI commands provided by plugins, without needing to understand how to modify their path.

Adding ?_facet_size=max to a table page now shows the number of unique values in each facet. (#1423)

When I’m using facets to explore data, I’m often interested in how many values are available in the facet—particularly if I’m faceting by a column such as country or state.

I added a ... link to show the maximim number of facets in Datasette 0.57. Clicking that link adds ?_facet_size=max to the URL, which now also adds a numeric count of the number of distinct facet values.

Upgraded dependency httpx 0.20—the undocumented allow_redirects= parameter to datasette.client is now follow_redirects=, and defaults to False where it previously defaulted to True. (#1488)

A while ago Tom Christie requested feedback on how httpx should handle redirects.

The requests library that inspired it automatically follows 301 and 302 redirects unless you explicitly tell it not to.

I’ve been caught out by this many times in the past—it’s not default behaviour that I want from my HTTP client library—so I chimed in as favouring a change in behaviour. I also suggested that follow_redirects=True would be a better term for it than allow_redirects=True.

Tom made that change for httpx 1.0, and then back-ported it for version 0.20—after all, pre-1.0 you’re allowed to make breaking changes like this.

... and Datasette broke, hard! Datasette embeds httpx pretty deeply inside itself, and the breaking change caused all kinds of errors and test failures.

This was the final push I needed to get 0.59 released.

Code that figures out which named parameters a SQL query takes in order to display form fields for them is no longer confused by strings that contain colon characters. (#1421)

One of my favourite obscure features of Datasette is the way it can take a SQL query such as the following:

And extract out that :zip parameter and turn it into an HTML form field, as seen here:

This used to use a regular expression, which meant that it could be confused by additional colons—the following SQL query for example:

I thought that solving this properly would require embedding a full SQLite-compatible SQL parser in Datasette.

Then I realized SQLite’s explain output included exactly the data I needed, for example:

The trick then is to run an explain, then find any rows with an opcode of Variable and read the p4 register to find out the name of those variables.

This is risky, since SQLite makes no promises about the stability of the explain output—but it’s such a useful trick that I’m now contemplating building an automated test suite around it such that if a future SQLite release breaks things I will at least know about it promptly.

This was a feature request from users of the datasette-auth-tokens plugin.

Part of my continuing goal to free up the term “config” to mean plugin configuration (which is currently mixed up with Datasette’s metadata concept) rather than meaning the options that can be passed to the Datasette CLI tool (now called settings).

I’ve got into the habit of documenting any Datasette internals that I use in a plugin. In this case I needed it for datasette-block-robots.

The base.html template now wraps everything other than the <footer> in a <div class="not-footer"> element, to help with advanced CSS customization. (#1446)

I made this change so that Datasette Desktop could more easily implement a sticky footer that stuck to the bottom of the application window no matter how short or tall it was.

The render_cell() plugin hook can now return an awaitable function. This means the hook can execute SQL queries. (#1425)

Another example of the await me maybe pattern in action.

This means plugins can conditionally register routes based on plugin configuration.

The goal of canned queries is to provide an interface for people who don’t know SQL to execute queries written by other people, potentially providing their own inputs using the :parameter mechanism described above.

If it’s being used for that, there’s not much to be gained from making them scroll past the SQL query first!

Adding "hide_sql": true to the canned query configuration now defaults to hiding the query for them—though they can still click “Show SQL” to see it.

Google Cloud Run recently added the ability to specify 1, 2 or 4 vCPUs when running a deploy.

If Rich is installed in the same virtual environment as Datasette, it will be used to provide enhanced display of error tracebacks on the console. (#1416)

Rich is Will McGugan’s phenomenal Python library for building beautiful console interfaces. One of the many tricks up its sleeve is improved display of exceptions, including more detailed tracebacks and local variables. Datasette now takes advantage of this if Rich is installed in the same virtual environment.

Another API that became documented after I used it in a plugin.

The datasette-remote-metadata plugin is pretty neat.

I sometimes find myself working on projects where I’m deploying a large database file—1 or 2 GB—to Google Cloud Run. Each deploy can take several minutes.

If I want to tweak a canned query or a few lines of text in the metadata for that deployment, it can be frustrating to have to push an entirely new deploy just to make those changes.

The remote metadata plugin allows me to host the metadata at a separate URL, which I can then update without needing a full deploy of the underlying database files.

This is Datasette 0.59: The annotated release notes by Simon Willison, posted on 19th October 2021.

Previous: Finding and reporting an asyncio bug in Python 3.10