Hosting provider Fly released Fly Machines this week. I got an early preview and I’ve been working with it for a few days—it’s a fascinating new piece of technology. I’m using it to get my hosting service for Datasette ready for wider release.

Datasette Cloud is the name I’ve given my forthcoming hosted SaaS version of Datasette. I’m building it for two reasons:

My previous alpha was built directly on Docker, running everything on a single large VPS. Obviously it needed to scale beyond one machine, and I started experimenting with Kubernetes to make this happen.

I also want to allow users to run their own plugins, without risk of malicious code causing problems for other accounts. Docker and Kubernetes containers don’t offer the isolation that I need to feel comfortable doing this, so I started researching Firecracker—constructed by AWS to power Lambda and Fargate, so very much designed with potentially malicious code in mind.

Spinning up Firecracker on a Kubernetes cluster is no small lift!

And then I heard about Fly Machines. And it looks like it’s exactly what I need to get this project to the next milestone.

Their new Fly Machines product gives you a new way to run containers there: you get full control over when containers are created, updated, started, stopped and destroyed. It’s the exact level of control I need to build Datasette Cloud.

It also implements scale-to-zero: you can stop a container, and Fly will automatically start it back up again for you (generally in less than a second) when fresh traffic comes in.

(I had built my own version of this for my Datasette Cloud alpha, but the spin up time took more like 10s and involved showing the user a custom progress bar to help them see what was going on.)

Being able to programatically start and stop Firecracker containers was exactly what I’d been trying to piece together using Kubernetes—and the ability to control which global region they go in (with the potential for Litestream replication between regions in the future) is a feature I hadn’t expected to be able to offer for years.

So I spent most of this week on a proof of concept. I’ve successfully demonstrated that the Fly Machines product has almost exactly the features that I need to ship Datasette Cloud on Fly Machines—and I’ve confirmed that the gaps I need to fill are on Fly’s near-term roadmap.

I don’t have anything to demonstrate publicly just yet, but I do have several new TILs.

If this sounds interesting to you or your organization and you’d like to try it out, drop me an email at swillison @ Google’s email service.

The Furo theme for Sphinx

My shot-scraper automated screenshot tool’s README had got a little too long, so I decided to upgrade it to a full documentation website.

I chose to use MyST and Sphinx for this, hosted on Read The Docs.

MyST adds Markdown syntax to Sphinx, which is easier to remember (and for people to contribute to) than reStructuredText.

After putting the site live, Adam Johnson suggested I take a look at the Furo theme. I’d previously found Sphinx themes hard to navigate because they had so much differing functionality, but a personal recommendation turned out to be exactly what I needed.

Furo is really nice—it fixed a slight rendering complaint I had about nested lists in the theme I was using, and since it doesn’t use web fonts it dropped the bytes transferred for a page of documentation by more than half!

I switched shot-scraper over to Furo, and liked it so much that I switched over Datasette and sqlite-utils too. 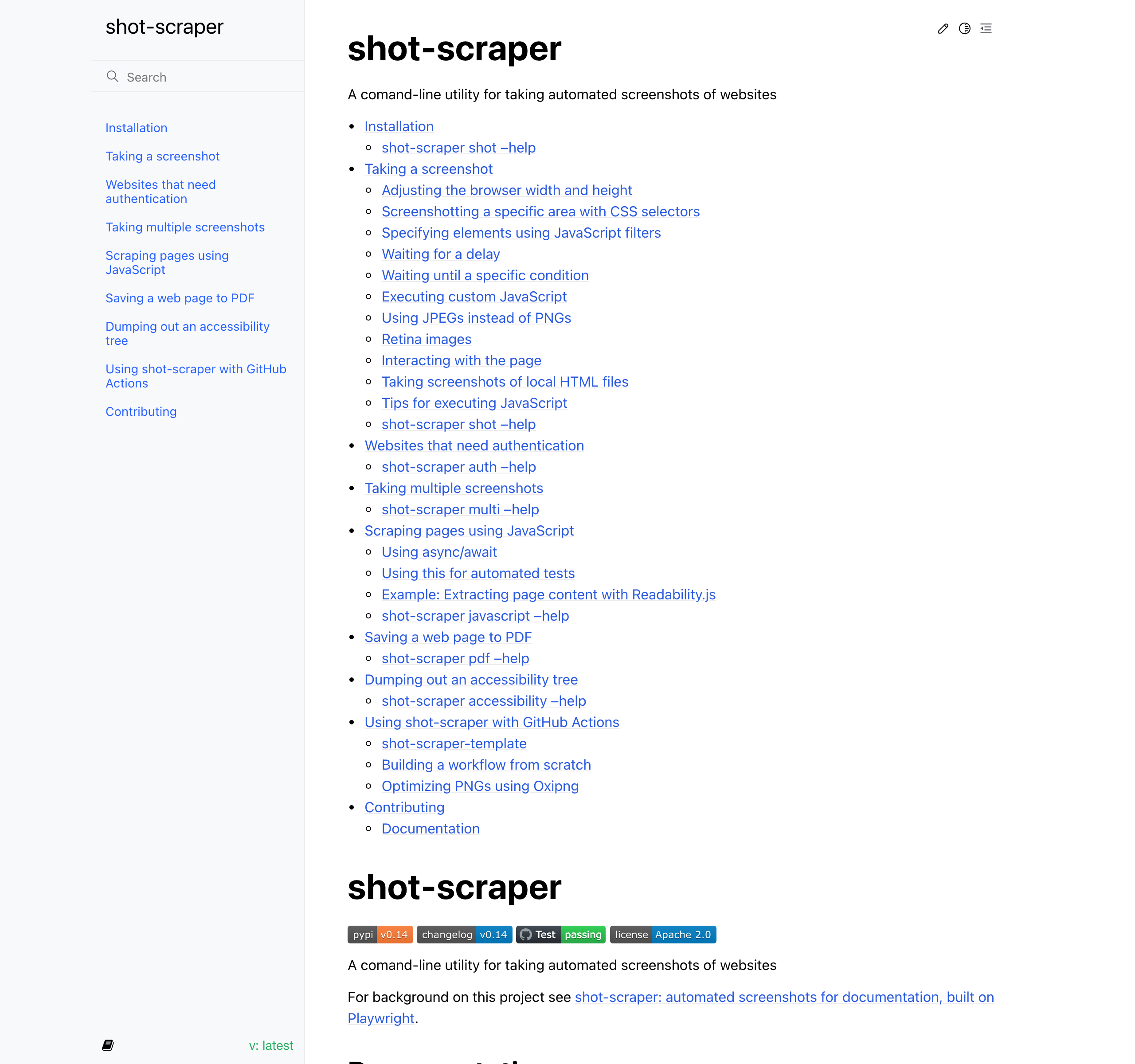 Full details of those theme migrations (including more comparative screenshots) can be found in these issues:

This is Weeknotes: Building Datasette Cloud on Fly Machines, Furo for documentation by Simon Willison, posted on 26th May 2022.

Next: A Datasette tutorial written by GPT-3